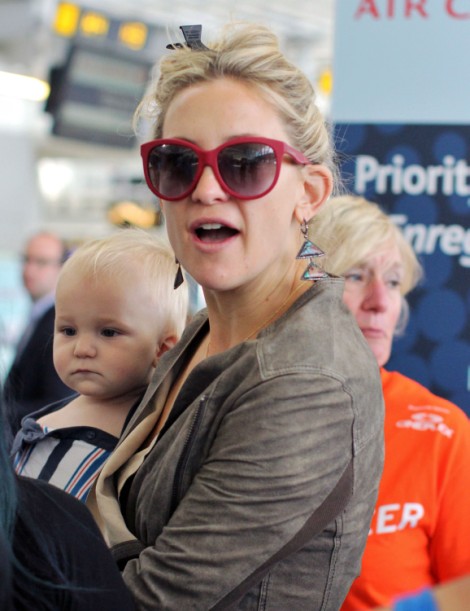 Star magazine has a lovely story this week about the trouble brewing between Kate Hudson and baby daddy Matt Bellamy. Apparently the quintessential California girl is fed up with separating her time between L.A. and London and wants to make the move to the U.S. for good.

“She did her best to put on a brave face and make the most of her adopted hometown. But she’s miserable in London. The dreary weather has done a number on Kate; she’s lonely without her family and close friends. Matt and Kate have been arguing like crazy over the move,” a source told the magazine.

Now here’s where my girl Gwyneth Paltrow comes in. Gwyneth  and Kate are tight, so tight that Kate blew so much smoke up her ass in a recent interview you’d think Gwyneth was a chimney. In reference to living in two different places, Hudson told Harper’s Bazaar in the October issue: “She’s been my go-to about where to get things done—grocery shopping,a good mani-pedi, you know, all that.  I look up to Gwyneth and how she has been in her life. She’s the real deal.”

That’s actually nice. I like those comments but I wonder how Kate took the news when she found out Gwyneth was skipping out and leaving dreary old London behind for good? Radar Online reported Gwyneth couldn’t take the back and forth anymore and just bought a cool pad in Brentwood. So, is this the reason why Kate’s putting up such a fight to do the same? Did Gwyneth whisper in her ear that she should move too?

I’ve got nothing to back that up but there are a lot of little coincidences, right? And a lot of you out there would totally believe Gwyneth would push something like that. But the case can also be made that my day is a little bit brighter when I get to write anything about GP. If she told me to move I probably would but I’m also pathetic and take GOOP way too seriously.

Besides that though, I can see how it would be hard for Kate to be in London. Not only is her family in the states but also her oldest son’s dad which probably adds more stress on everything. And if Bellamy tours half the year anyway, Kate should be able to live where she wants to. Any place is tolerable if you have your best friends there, but when they leave, it can seem pretty lonely. I know what you’re saying. Kate should buck up and take one for the team and do what’s best for her family. I know… but it’s Gwyneth Paltrow. Gwyneth Paltrow!

Do you think Gwyneth’s leaving has anything to do with Kate’s decision to want to move back to the states? I know we all want to blame Gwyneth but it isn’t really her fault Kate and Matt are fighting, right? Gwen’s got her own baby daddy issues.