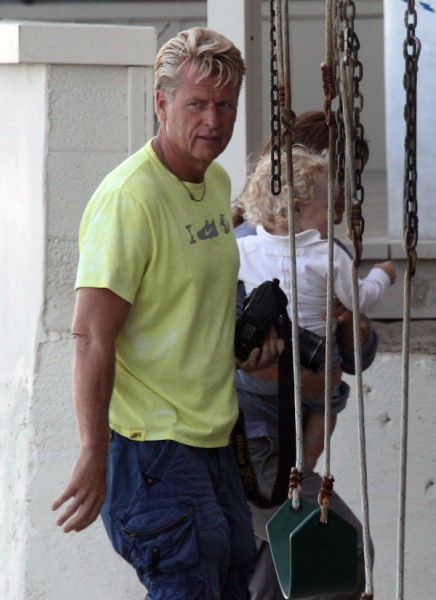 Is Jessica Simpson’s dad gay? Reports are surfacing that the former Baptist minister recently came out to his family and his overdue confession is the real reason why Tina Simpson filed for a divorce after 34 years last September.

“Joe got the family together about two months ago and came out of the closet,” an insider told the National Enquirer. “He told them that he’d tried to continue in his marriage to Tina, but he couldn’t go on any longer and deny the fact that he had these feelings for men. Joe said it wasn’t fair to her, and it wasn’t fair to him.”

He’s right. It wasn’t fair to anyone. Should he have figured out his sexual orientation a little sooner? Ah, sure. But better late than never and good ‘ole boy is taking advantage and making up for lost time now. Apparently he already has a 20-something boy  toy on the side. Sources are now saying the boy toy could have been with Joe when he was picked up for drunken driving in early August. Someone was in the car with him but everyone just assumed (or perhaps was falsely told) it was Tina. That would have been bad – DUI and public outing in the same night. At least now he can come out in a more respectable way for his family at least.

Because at this point I don’t really care too much about Joe’s feelings. If this is true, and there have been rumors out there about Joe for awhile, you’ve got to feel for Tina and his girls. Sure, it must have been hard living in the closet all those years and stifling a huge part of yourself but I just can’t imagine one day waking up to my husband telling me he was gay. How horrible! What do you say without coming across as an asshole? “Well, honey I’m so happy you’ve realized this about yourself but thanks for lying to me for 35 years”? I have a feeling it wouldn’t come out as nice if I had to say it!

Is Joe Simpson gay, you think? I wonder how Jessica and Ashlee took the news.