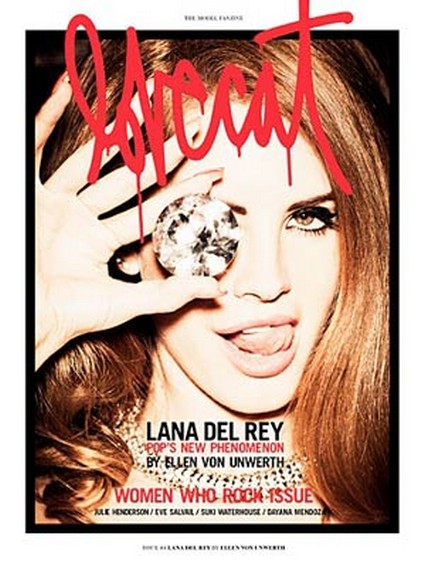 I came across this article of Lana Del Rey in Lovecat magazine in which she graces the cover looking nothing but gorgeous. Although I don’t know a huge amount about the singer, I caught her Saturday Night Live performance were she received mixed reviews. It seems as though I need to immerse myself more into her music as she has quickly become one of this year’s breakout artists after her January 31st release of “Born to Die”. It immediately soared and was number 2 on the U.S Billboard 200 albums charts. So why haven’t I bought her CD?

While Lana (otherwise known as Lizzy Grant) is fast becoming a household name on everyone’s ipod, she found the time to sit down with Lovecat to discuss a secret from her past which I find crazzzzyyy nuts! Check this out:

“When I was young, I had a tree house and in order to get to the top of it, me and my sister had to climb up a satin Christmas ribbon. One day, on my way up the ribbon snapped and I fell 15 feet on to a fire pit. I broke my ribs and never told anyone except my mother. Last year I stopped into a Unitarian church and and a man came up to me out of the blue and told me he was a clairvoyant and that the reason why I had a shallow, breathy voice was because I had fallen out of a tree house 15 years ago. I still can’t get over how strange it is that he knew that.”

Seriously, if that’s not a pre-determined destiny I don’t know what is. Not only is that an awesome story, she can now officially credit her breathy voice from having a broken rib. She just suddenly became much cooler.