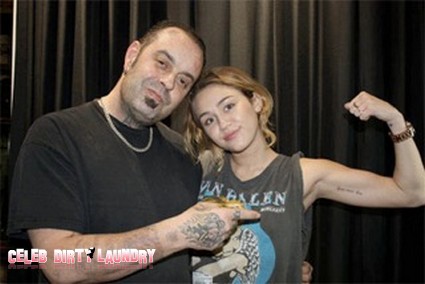 Check out this gun show! Miley Cyrus ought to start conserving space on her body, because at only 19-years old the singer/actress has added yet another tattoo to her growing collection. According to TMZ, Cyrus was at Studio City Tattoo’s around 8:00 pm last night with friends and Boyfriend Liam Hemsworth and got the words “Love Never Dies” tattooed on her inner left bicep in black script.

Whether Miley chose this tattoo as a late V-day gift to her Hunger Game’s beau Hemsworth or in tribute to her secret love for Andrew Lloyd Weber’s sequel to Phantom of the Opera (titled Love Never Dies to all you non-Rachel Berry’s) is unclear, but Miley appeared to be super stoked about her fresh ink as she posed with friend and tattoo artist Illya in a sleeveless Van Halen t-shirt. Oh Miley, you so badass!

As we reported recently, Miley has been rumored to be spiraling out of control behind the scenes. But this little act of rebellion is getting old as we’ve seen her inking up so many times. In fact, this tattoo takes Miley’s count to 12—at least, those are the ones that we know of. She’s got a dream catcher on her right side, the words “Just Breathe” under her left breast, a cross, a peace sigh, an OM symbol, a heart, an anchor, an equal sign on her right ring finger (for gay rights), the word “Karma,” a skull on her ankle that matches one of Liam’s tattoos, and the word “Love” on her ear.

Of her many love themed tattoos, Miley told E! News “There’s so much negativity in the world and what you only need to hear is all the love. People try to say to me, ‘I just heard someone say this or that about you,’ and I just ignore it because it’s irrelevant. Love is what makes the world go around, and that’s all we need to focus on.”