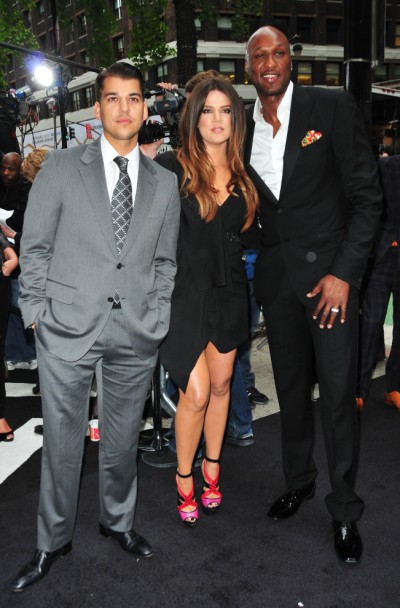 For those of you viewers eager for never before seen clips, last night’s E! Special Keeping Up With The Kardashians: Dishing It Out was probably a spectacular night for you. Not only did you get to see the early courtship of Kanye West and Kim Kardashian when she was in between marriages, but you got to watch Khloe Kardashian out Rob Kardashian in front of millions. But was it just a friendly, sisterly jab or does Rob really have pent-up feelings for Kourtney’s baby daddy, Scott Disick?

It’s no secret that Rob and Scott have a special relationship that borders love and hate and God awful inappropriateness at times. They’ve spooned, groped, partied and hammed for the cameras with a brotherly familiarity but if Khloe’s starting to raise her eyebrows, should we?

I’d say no. I don’t watch KUWTK very often, but when I do,I love watching the scenes between Rob and his brother-in-laws. You can tell how much Rob appreciates having some other dudes around to keep his sisters in check. It doesn’t seem like Rob has too good of a relationship with the Jenner boys for some reason. I wouldn’t want to talk to Brody Jenner either… just saying… can’t fault Rob on that one. And besides, it’s not like we haven’t seen Rob utterly in love/heart broken before. Adrienne Bailon was around just long enough for Rob to cheat on her and live to regret. I know it was a douche move but I can’t help feel bad for him on that one. He took that break up so badly! And doesn’t he still have her name tattooed on him somewhere?

So Khloe might think the Eskimo/chaste American/European double cheek kisses between Rob and Scott are odd but I doubt anything’s going on. If we start seeing some French kisses than Khloe might be on to something. But I just can’t believe two Kardashians would have such bad taste as to want to be with Scott Disick.

Do you the Scott Disick/Rob Kardashian/gay vibe or are the two just playing up their relationship for the cameras?