It’s Another Daughter For Bruce Willis 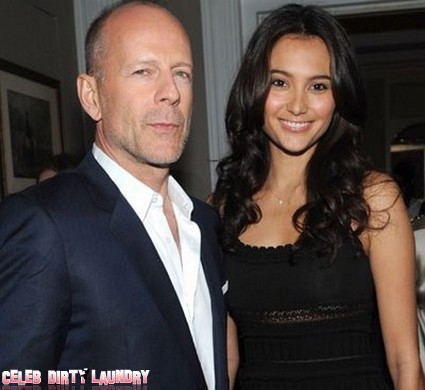 Bruce Willis and his wife Emma Heming are expecting a baby girl. It’s a case of deja vu for the action man – he already has three daughters from his first marriage to Demi Moore.

There’s going to be a big age gap between Bruce’s three children and the new addition to the family. Rumer Willis is now 23, Scout Willis is 20 and Tallulah Willis is 17. But the Die Hard star has always had a soft spot for his girls ‘My daughters really rule my emotions, and I would do anything for them’. He’ll just be happy to have a baby that’s healthy whether it’s a boy or a girl. It’s his wife’s first child but she has been playing stepmother for a couple of years.

The 56 year old married Emma  – 23 years his junior – in March 2009. Bruce and Demi divorced in 2000 after 13 years of marriage but remain good friends. The tough guy was often seen hanging out with his ex wife’s former husband Ashton Kutcher! He’s also been there for Demi since she announced the split from her toyboy late last year.

Emma and Bruce’s baby is expected to be a stunner. Heming has made quite a name for herself as a model. She was even ranked in Maxim magazine’s Top 100 list. She’s also graced the covers of Elle, W and Glamour. On the runway she strutted her stuff for Christian Dior, Victoria’s Secret and Valentino.

We wish Bruce all the best though – he’s gone from one household of women to another!