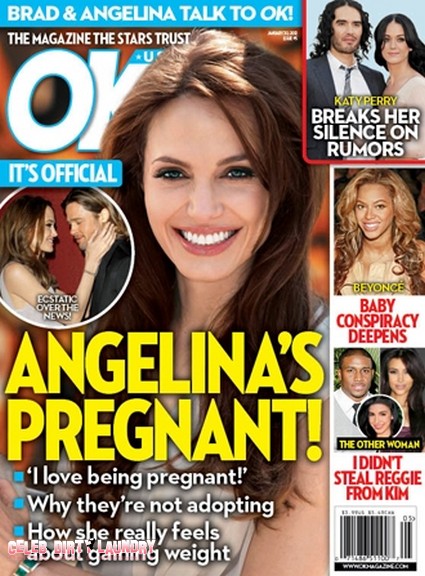 The current issue of OK! Magazine features the cover story ‘Angelina’s Pregnant.’  The magazine claims they have all the details on why Angelina Jolie and Brad Pitt decided to get pregnant again and not adopt.  Angelina did say recently, “I could end up pregnant” when asked whether she and Brad would add to their brood.  They go on to say that both Brad and Angelina are ecstatic over the news and that Angelina loves being pregnant and they have the scoop on how she really feels about gaining gaining weigh while she is pregnant.

OK! has more: “A source close to the Oscar-winner reveals that Angelina is expecting her seventh child and telling friends she can’t wait to be a mom again.  “She’s almost three months along,” the source confirms to OK!. “It’s not something she wants to officially announce but she’s at a point where she is telling a select group of people.” Adds an insider: Angelina is really savoring every moment. she’s having a tough time with morning sickness but says it’s all worth it.”

If the news is true we are happy for Brad and Angelina but after seeing Angelina in her Golden Globe Versace dress it does not look like she is pregnant at all.  What do you think – are Angelina and Brad expecting their seventh child?

Also included in this week’s issue OK!’s own Mayra Veronica is telling everything she knows about Kim Kardashian‘s romance with Reggie Bush.  Lindsay Lohan has a strategy on how she is getting back on Hollywood’s A list and the magazine has the scoop on it.

To find out more about Angelina and Brad’s joy at being pregnant again and a lot more, pick up the current issue of OK! Magazine on stands Thursday!