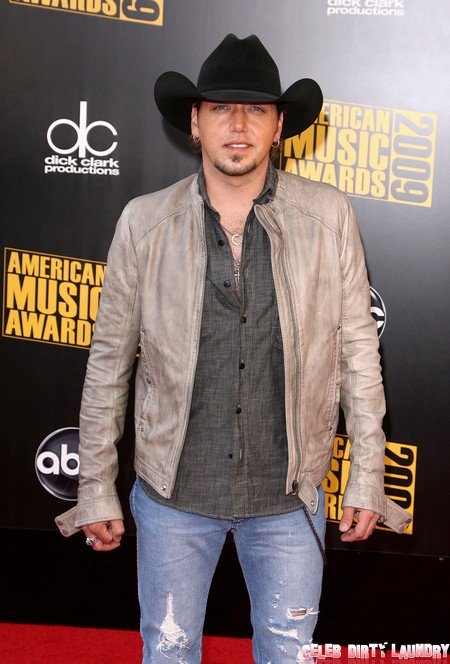 Country music is all about pickup trucks, twanging guitars, and regret. One country star—certified platinum artist Jason Aldean—is lucky enough to have plenty of inspiration for his next album. This weekend, he was seen drunk in LA, kissing American Idol loser Brittany Kerr. Pictures show him holding her hips and kissing her. This has come as a shock to his wife of 11 years, Jessica Ussery, with whom he has two young daughters. The irony is thick, because Jason is the current cover story for People Magazine, in which he talks about loving his family and all of the fun things they do together—including tickle fights, buying toys at Target, and hanging out at Home Depot.

Since the short-lived affair broke, Brittany has been forced to shut down her Twitter due to all of the hate tweets she’s gotten from Jason’s adoring fans. Isn’t it strange how people always blame the other woman, and not the drunk cheating husband? There were two people in that bar. Brittany has since denied any knowledge that he was married, which could be true. Either way, it isn’t her responsibility to know! Jason should love his wife enough to do the right thing. Jason has released a statement:

Hey Guys – I wanted to talk to you directly, so you were hearing the truth from me and not just reading allegations made about my personal life on gossip web sites. The truth is that I screwed up. I had too much to drink, let the party get out of hand and acted inappropriately at a bar. I left alone, caught the bus to our next show and that’s the end of the story. I ultimately ended up embarrassing my family and myself. I’m not perfect, and I’m sorry for disappointing you guys. I really appreciate being able to work through this privately with my family and for all your continued support.

I wonder if that apology will convince his wife to cook up some of his favorite mac and cheese any time soon? Does a drunk night in a bar count as cheating? It’s certainly a violation of trust, but is it enough to undermine the love of an established family? Jason will have to confront his daughters, 9 and 5, about the incident, and my guess is that, at the very least, he’ll be spending some time on the couch. Through it all, wife Jessica has remained silent. What is the Country Music thing to do? Church, therapy, a shot gun to the tire of his favorite truck? Of course making Jason pay too much would be usury, huh?  Can the stay-at-home mom hope to compete with Brittany, the aspiring singer/model/actress who also dances for the Charlotte Bobcats?