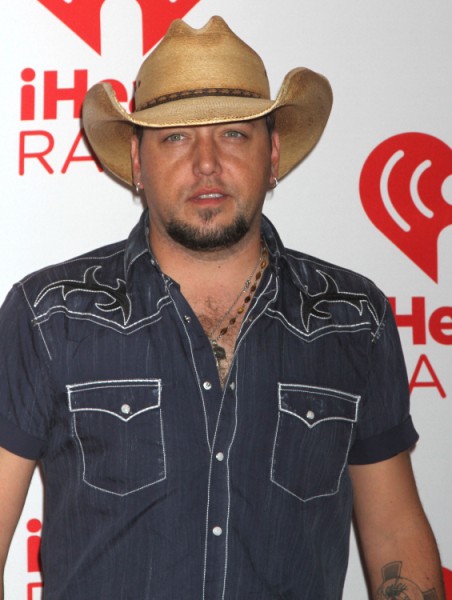 Can we give a guy two claps for at least cheating with a hot chick? No? Just asking. Because Brittany Kerr might be an other woman but she’s a pretty hot one and she knows it since her bikini pics are splashed all over the internet.

Jason Aldean is doing some hefty damage control after getting caught cheating on her wife of eleven years, and mother of his two daughters, Jessica Ussery. Last weekend Jason was snapped snuggling up and kissing on Bobcats dancer and American Idol contestant, Kerr. Naturally his wife is p-ssed, he’s backtracking and Kerr is getting hated on – pretty standard affair story. Kerr has so much crap getting thrown at her she deactivated her twitter account and issued an apology. According to TMZ Kerr said, “The actions I portrayed recently were not a representation of my true character, but a lapse in judgment on my part. I would like to sincerely apologize to everyone that has been affected by this, including my friends & family.”

For his part, Aldean also issued a statement. He said, “Hey Guys – I wanted to talk to you directly, so you were hearing the truth from me and not just reading allegations made about my personal life on gossip web sites. The truth is that I screwed up. I had too much to drink, let the party get out of hand and acted inappropriately at a bar. I left alone, caught the bus to our next show and that’s the end of the story. I ultimately ended up embarrassing my family and myself. I’m not perfect, and I’m sorry for disappointing you guys. I really appreciate being able to work through this privately with my family and for all your continued support.”

Again, both pretty standard. It’s not like they had sex on the dance floor or anything but if I was Aldean’s wife I’d be pretty nervous. This wasn’t a one time thing. If Jason hit on a hot chick at a random bar then be probably hits on hot chicks at every bar. Maybe they have an agreement – what she doesn’t know won’t hurt her sort of thing. If that’s the case then Aldean better start taking his smart pills because everyone has a phone and everyone’s a paparazzo. And maybe Jason should lower his standards when he goes out. I had no idea who this dude was so the person that took the pics was probably just trying to get some shots of Kerr who is way hot. He should lower his standards for his one-night stands. Maybe then  people  won’t take notice. Just saying….