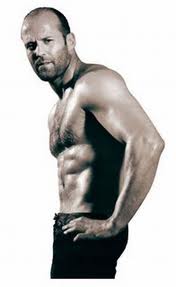 Most women will agree, Jason Statham drips with sex appeal in every role and his part in Safe is no different.  He is usually cast in gritty roles that remind one of a Clint Eastwood-like persona.  Statham is quick to dismiss any comparison with the great one saying, “You got to be careful mentioning people as great as Clint Eastwood. You can’t put me in the same sentence as that man.”

But many of his fans would, in fact, put him in the same sentence as Eastwood.  Statham came to acting after a stint as an Olympic Diver, so it’s no wonder he leans towards roles that require serious discipline and training. “I have a sense for what feels right in the physical action,” he says of his starring role in Boaz Yakin’s wild ride, “Safe”.

“I like the clarity of good versus evil,” Statham says. “People can see the definition between the two. Then you can really hang your hat and get behind the right people. You can just will them through the story.”

Safe is already getting pretty good reviews and Statham is particularly fond of an intricate subway fight that was filmed both in and on top of the cars. “I liked the subway fight. That was very inventive and quite painful for a few of my fellow stuntmen.”

Safe hits theaters this weekend.  Will you be heading out to see Statham on the big screen?  Let us know what you think about this studly stud in the comments below.