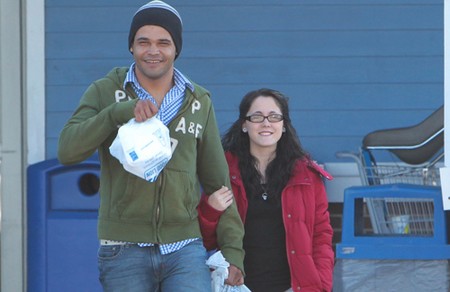 Teen Mom 2’s Jenelle Evans posted on her personal Facebook that she was with her notorious ex-boyfriend, Kieffer Delp, but that they are not dating. When some commentators expressed disapproval over her decision to see Kieffer, Jenelle attempted to defend it. “Dude, I’d rather be with a pot head then a murderer whose in the Marines who could probably get away will killing me and hiding my body where nobody will find me..” she wrote.  Oh yes.

By “pothead” one can speculate she is referring to Kieffer and by “murderer” she was referring to her now ex-fiancee, Gary Head, who served in Afghanistan. The couple just broke up last weekend, after they both were arrested and hit with a series of charges ranging from possession of marijuana to assault.

But wait, it gets better. She also claims Gary tried to kill her. Yes, KILL her. “He never hit me the first time,” she admitted, assumingly referring to her apparently false claims in April that he hit her, “but this weekend when he tried to kill me i was doneeeeeeeeeeee.”

That being said, Jenelle did later concede that Gary is “no murderer,” but insists, “he tried killing me.”

Of course, since none of us were there, we can not confirm or deny whether Gary actually did this.

Upon hearing of the rumors, Gary appeared unfazed. “Who gives a flying fuck!!!” he tweeted. “I’m SINGLE BRO. Let whatever be, be. I’m living life.”

Gary has yet to deny Jenelle’s claims, saying that he is not allowed to talk about it, but friends who know him have always insisted he would never lay a hand on a woman.