Jenelle Evans Is Happier And Sexier With Kieffer Delp 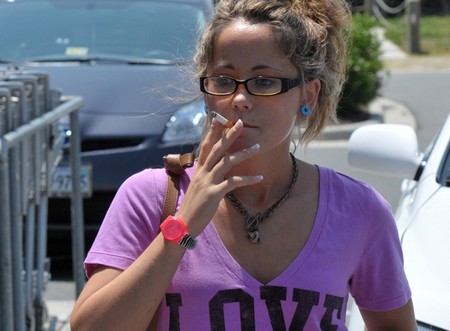 Looks like Teen Mom, Jenelle Evans is finally happy and getting settled with ex-boyfriend Kieffer Delp.  Of course Kieffer is no longer her ex, is he?  Jenelle who was in a previous relationship with Marine, Gary Head, broke up with him April 1st of this year after she found out he cheated on her with her best friend Victoria Rhyne.

No sooner did she break up with Gary, her friends commented on her official face book profile, commenting the once couple were so cute together.  But it was Jenelle herself, saying “no he f*cked tori. It’s DEF over.”

With that bad relationship in the past, Jenelle has found true happiness with her ex Kieffer.  According to her official face book profile, a friend of hers made a comment “what did your mom say when she found out u dating Kieffer again” Jenelle herself said “it’s pretty obvious.” Her friend knowing how her mother’s temper can be towards Kieffer as we seen on the show said; “Was she pissed.” Jenelle quickly responded “Nope she’s giving him another chance actually.” Good for Jenelle. Good to see her happy again!

And for those who have any doubt about Jenelle and Kieffer’s relationship. Here is a little message from teen mom herself. “me and kieffer are in fact working things out. he has a job, has his GED, and his own car now. he goes out of town to work for a week then comes back for a few days then leaves again. if he fucks up this relationship.. im gone. if i fuck up this relationship.. hes gone. but from now on im not letting anyone take me down. :] PROMISE YU GUYSSSS !!!”

There you go – true love for Jenelle… and Kieffer had his GED!  Life is perfect now.