Jenelle Evans Says She Has No Money 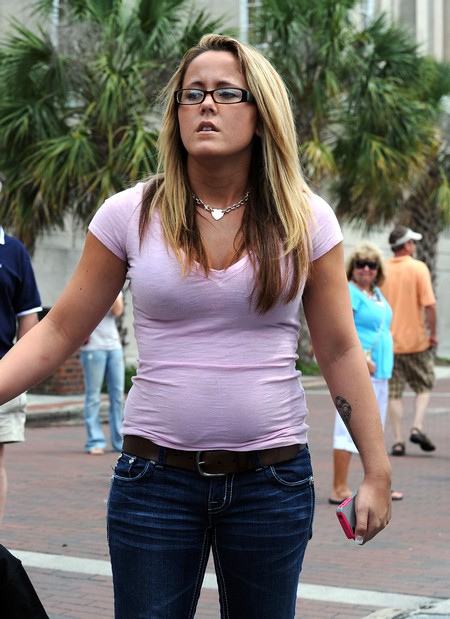 Yesterday, Teen Mom 2’s Jenelle Evans tweeted that she was hungry. “Then eat,” said one fan. Surprisingly, Jenelle replied that she could not. “[I] have no food, have no money,” she replied. Asked if this was a joke, Jenelle confirmed it was not. “No, I really don’t [have any money].”

Puzzled fans immediately began asking how this was possible, with the money she makes on Teen Mom 2 and her Scentsy business. One fan even incorrectly assumed that Jenelle makes $50k per episode. “I WISH,” scoffed Jenelle.

Previously, in exclusive interview with Jenelle’s ex-boss, James Duffy, it was reported that Jenelle makes $85K per season, but Jenelle denied making that much.

No one knows for sure how much the cast of Teen Mom 2 makes, but a very reliable source has said that they can not get paid for their season until it airs. If true, this means that even though the first season of Teen Mom 2 started filming sometime April and May of 2010, Jenelle and co-stars Kailyn Lowry, Chelsea Houska and Leah Messer were not paid until January of 2011, when the season first aired. It would also mean that as of right now, they have only been paid for two seasons, which would mean Jenelle will have more money coming in when Season 3 and Season 4 air.

The question is, how much? Further research suggests it may not be nearly as much as many think.  The second season of Teen Mom 2 aired on December 6, 2011. About three weeks later, right before New Year’s Eve, Chelsea pissed off her former friend, Megan Stroup, who reacted with a very public, two-day Chelsea-bashing session on Twitter, where she told one fan that Chelsea had just received thirty thousand dollars. While Megan did not explicitly say Chelsea received that money from MTV, the timing appears to be right in line with the airing of the second season.

That being said, it is not known for sure whether Jenelle, Chelsea, Kailyn and Leah are paid the same amount, or if one makes more than the other.

This may explain why Jenelle has suddenly began linking her tweets to Sulia, though, which people can get paid for. It also may explain why she recently set up a website for her boyfriend, Kieffer Delp, to sell his pipes.