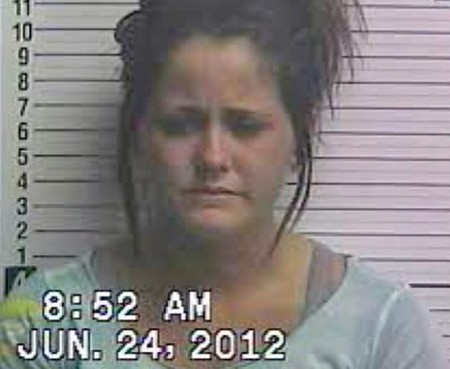 Teen Mom 2’s Jenelle Evans appeared in court today to face charges of simple assault against her ex-boyfriend, Gary Head. She was also charged with possession of marijuana, which also stemmed from a June 24th arrest. Gary, who was arrested with her at the same time, also appeared in court to face charges of simple assault and possession of marijuana.

It is unclear what Gary pleaded at this time, but according to Jenelle, there was some major drama between Gary and her current boyfriend, Kieffer Delp. “Kieffer chased after my ex when we took a break for lunch and it kicked off court grounds while my ex chilled with the cops scared,” tweeted Jenelle. “Got continued because they are looking into more evidence about the abuse and I denied their plea bargain.”

Jenelle also says that the case will go to trial. No one who was not present the day of their arrest knows for sure what happened, but it seems to me that if one got a cash prize for most 911 calls in one year, Jenelle would give George Zimmerman a run for his money. She has called the police on several people besides Gary, including Kieffer, James Duffy and at least three of her friends, multiple times. Jenelle is reportedly the one who called the police the day of their June 26th arrest at a her home in  Leland, NC.

It is unclear why Gary had to appear in court with her at this time, as he is a Marine — he will likely be tried in military court, not civilian court. Celeb Dirty Laundry will keep you posted as more on the case becomes known.