Jennifer Aniston and Justin Theroux Break Up Then Reconcile 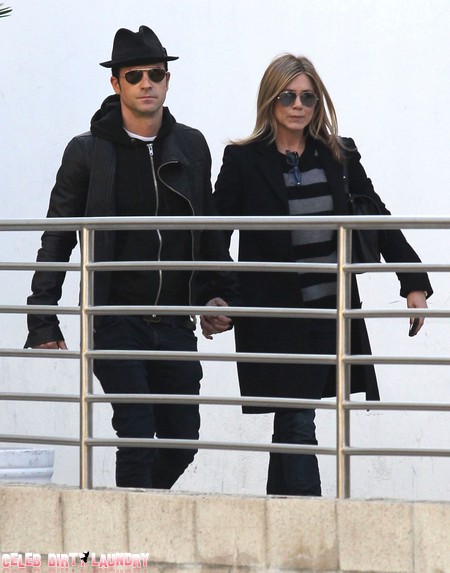 Jennifer Aniston and Justin Theroux split up after a blazing row but have temporarily reconciled.  Yet the writing is on the wall as Jennifer is furious over Justin’s alleged flirting and fooling around with two women on February 29 at the Chateau Marmont.  This combined with his secretive behaviour and his refusal to stop calling ex-girlfriend Heidi Bivens could quickly lead to a permanent split between the two.

OK Mag has sources that paint an ugly picture of a chain-smoking Jenn stinking of cigarettes and trying to force an unwilling Justin to settle in California.  Henpecked Justin meanwhile refuses to pop the question and continues to make Jennifer suspicious and jealous.  Jennifer is always on high alert for any cheating since Angelina Jolie stole Brad Pitt right out from her marital bed.

OK Magazine Print Edition, March 28, reports:  Jennifer Aniston’s romance with Justin Theroux looked like the real thing – he seemed like a keeper. But now Jennifer is furious over his Feb. 29 flirtations at the Chateau Marmont – so much so, that the pair briefly broke up.

The couple has patched things up – for now – but Jen’s hurt remains, all the more because the Marmont is one of their special haunts: just two weeks earlier, Justin had thrown her a 43rd birthday bash on the roof.

In fact, Jen had been growing suspicious even before this episode.  “Justin is forever slipping out and not saying where he is going,” the pal says. Another friend confides that Jen has “always been clingy. But she’s been cheated on before… who can blame her?”

“Justin is feeling hen-pecked,” an insider tells OK!, adding that the couple are also at odds as to where to live. Justin wants to stay in NYC while Jen hopes to keep Beverly Hills as her base. And Justin hates that Jen chain-smokes.

“This grosses him out because her hair smalls and so do her clothes,” the insider tells OK! “But Jen will not stop smoking for anything or anyone.”

Despite the tensions, Jen was hoping Justin would propose, perhaps on her birthday, February 11.

“But that came and went and she is starting to feel used,” says the pal. “Friends wonder if they can really make it work longterm… Jen and Justin really do love each other so they certainly want to turn it around.”

Will Justin stick it out with Jenn?  Is the boost to his career worth the hassle?  His wages as an actor more than quadrupled since he started going out with Jennifer and offers are pouring in for his services.  Not saying that Justin is in it ONLY for the dough but we have to ask…