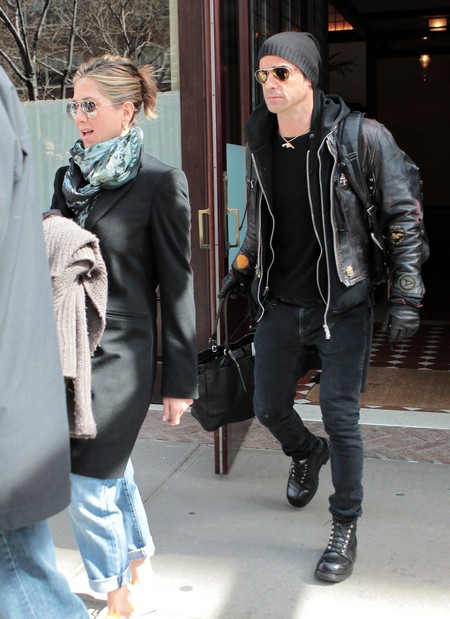 I guess Jennifer Aniston and boyfriend, Justin Theroux have no problem mixing real life occurrences with work endeavors.  The duo is said to be working on a short film together for Smartwater, a company Aniston has endorsed for years.

“Jennifer Aniston and Justin Theroux are working on a short film spoofing the gossip coverage of their lives. One source tells Page Six, “It is a parody of the paparazzi and tabloid interest in Jennifer’s life.”

The movie will poke fun at nonstop speculation that Aniston could marry or get pregnant. The film, produced for Smartwater, is planned to be a new viral ad for the water brand she promotes. The source added that Theroux is helping Aniston write and direct the project, and they’ll shoot it in July.”

I’m a bit confused here.  The duo is writing a film basically spoofing the media’s reaction to them and all the while they actually hand feed things to the press in order to remain relevant.  Does that actually make sense?  Doesn’t it boil down to the simple fact that at this point in their careers, they are famous mainly because of media interest and not because of the stellar work they are putting out there?  How about choosing some amazing projects that help hone their craft a bit more instead of manipulating things to earn a paycheck?

Are you a fan of these two?  Do you think that they have taken an easy path to fame rather than actually working for it?  Will they ever marry or is he just another diversion for her?  Tell us your thoughts in the comments below!