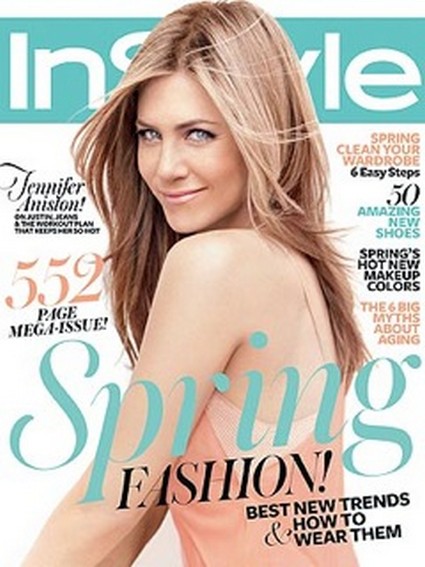 Looking gorgeous in spring fashion, Jennifer Aniston is the cover girl for March’s issue of InStyle magazine. The magazine has just released a preview of their interview with the 42-year-old actress, who opens up about her obsessive beauty routines, her new beau Justin Theroux, and of course, those pesky tabloid headlines that always have her at war with Angelina Jolie and Brad Pitt.

From the beginning of the interview, the “Wanderlust” star was quick to dismiss the headlines that have her in a perpetual love triangle with Pitt and Jolie. “The triangle with my ex-husband – and that there’s a feud there. It’s constant. It’s a story headline that won’t go away, but it’s a money thing,” says Aniston, admitting that it’s a story that sells tabloids.

The star was happy to move from the topic of old love to new, and shared that her relationship with actor-director-screenwriter Justin Theroux is going strong. The actress admitted that she’s in a “joyful and peaceful” place in her life and finally knows what she wants in a man.

Now, if only she would open up about those baby rumors!!

On the topic of her age, Aniston told the magazine that she feels young ‘every day’ but is surprised by the fact she’s getting older. You know what makes me feel old? When I see girls who are 20-something, or the new crop of actresses, and think, ‘Aren’t we kind of the same age?’ “Aniston says. “You lose perspective. Or being offered the part of a woman with a 17-year-old child. It’s like, “I’m not old enough to have a 17-year-old!” And then you realize, well, yeah, you are.”