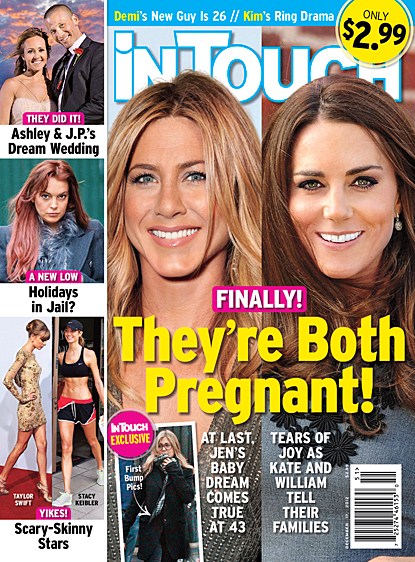 The current story of In Touch features the cover story, “Finally, both Kate and Jennifer are pregnant.”  The magazine has the big reveal this week, Kate Middleton is pregnant, nothing new about that right?  The palace made the announcement December 3rd, that the Duchess and her husband Prince William were expecting their first child.

The big news this week is, In Touch is confirming that Jennifer Aniston is pregnant, yet again!   Considering the fact that according to the tabloids, Jennifer has been pregnant 99 times in the past 5 years, one has to wonder if this story is true.  The magazine claims that Jennifer and her fiance Justin Theroux are expecting their first child together, again.  They even have the pics to prove it!  Must be a slow news week.

According to In Touch, “Justin’s telling his friends.  Jen’s really excited, too, but she’s concerned because of her age and because it’s early. She wants to make sure everything’s okay and is focusing on her health right now.”

Jennifer’s publicist has denied the rumors, but that has not convinced In Touch.  They claim an insider recently saw Jennifer and she was glowing when shopping with Justin for furniture.  The magazine goes on to claim that their friends and family are thrilled, “Everyone around them is so excited.  It’s the most wonderful surprise.”

What do you think has Jennifer’s baby dream at 43 finally come true?  Or is this groundless speculation by the magazine on a slow news week?  Hit the comments and let us know your thoughts!