Jennifer Aniston Sizzles At Star Studded 2012 AFI Awards Without Justin Theroux By Her Side! (Photos) 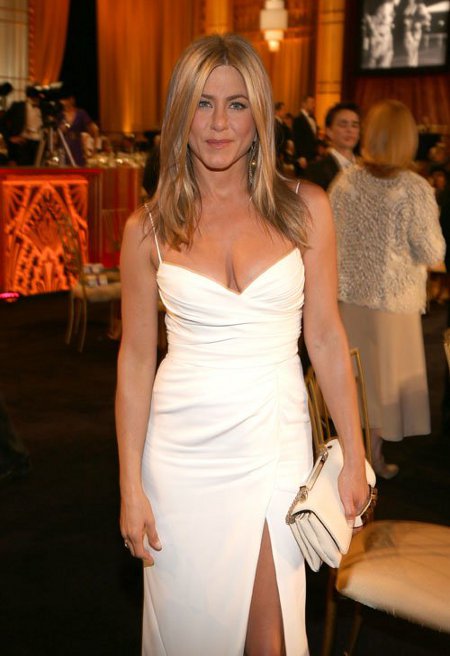 Jennifer Aniston was recently seen sizzling at the star studded 2012 AFI Awards and boyfriend Justin Theroux was nowhere to be seen, adding fuel to the rumors that their relationship is in fact on the rocks.

Jennifer went to the AFI awards last night and looked exquisite in a white Burberry dress which revealed a perfectly toned leg. She was there to celebrate Shirley MacLaine’s lifetime achievement award. Jennifer Aniston was in the company of Hollywood royalty, with the likes of Julia Roberts, Meryl Streep and Jack Nicholson sharing the red carpet with her. The gala was held at the Sony Pictures Studios in Los Angeles. The celebs drank expensive wine and ate salmon while they listened to the self-indulgence of old Hollywood. What a way to spend your night hey?

Jennifer was there. Katherine Heigl was there. Even Dakota Fanning was there. The question which begs asking is, where was Justin Theroux? Jen’s year long partner. As we recently reported here on CDL, Jen’s relationship seems to have taken a turn for the worse, with her being a clingy and possessive girlfriend to Justin, the two seem to have been under a bit of a stress lately. They have been spotted every now and then popping out for dinner, but as we all know in the world of gossip, a good din-din buffer might quell any rumours these relationships face.

When people go to events without their partner, it means one of two things, either the partner is dead (or working on a project), or there’s a bit of trouble in paradise. We choose the latter. It makes more sense, except if you’re a serial killer.