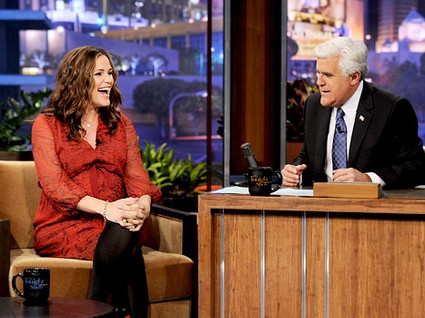 The ever-glowing Jennifer Garner stopped by and visited her pal Jay on last night’s The Tonight Show with Jay Leno.  The main topic of conversation was Jen’s pregnancy and the sex of her baby.  If you’ll recall awhile back I pondered the question as to when Jen was giving birth as it feels like she had been pregnant for quite some time.  Turns out, she’s just really, really pregnant and still has a little bit to go.

Jen admitted that she’s not due until spring and that she’s just “17 months pregnant”.  She also said that while her and husband Ben Affleck (yumminess) know the sex of their baby, they are not telling their two girls Violet, 6, and Seraphina, 3.

When Jay asked Jen if Ben was hoping for a boy, this is what she said:   “I would have thought he wanted a boy. At first I think I really thought so. And then he kind of said, ‘Well, we have girls. We know how to do girls. My girls love me. I’m the big guy in the house.’ So, now I’m not sure.”

Yes but can you imagine a little mini Ben Affleck?  I’m banking on a boy – although a healthy baby will do.  Jen and Ben is one couple that I seriously hope pulls through the nasty Hollywood divorce curse.  Even their names rhyme, they just belong together!  Let’ also not forget that they are one of the most gorgeous couples ever.  That helps.