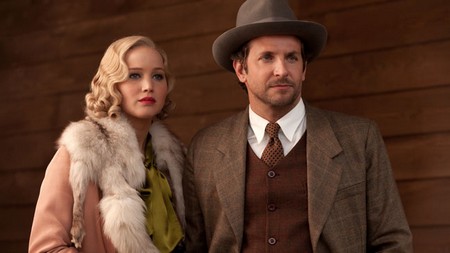 How the heck does Jennifer Lawrence have the time to film so many movies back to back?  Oh right – it’s the magic of Hollywood.

Next up for Jen is the film ‘Serena’, in which she stars alongside Bradley Cooper.  I kind of like the sound of that match!  A new still of the film has just been released, and naturally the two look amazing.  Especially Jen – I’m all for Brad but can we talk about how gorgeous her hair looks?

The film follows Jen and Brad as newlyweds who travel to North Carolina to begin building a timber empire.  The story takes place in 1929 (that explains Jen’s awesome hair) with Jennifer playing the title character Serena and Bradley playing her husband George.  Together her and her husband become very successful– until Serena learns that she is unable to bear her a child,  and then she sets out to murder the woman who bore George a son years earlier.

I won’t spoil the rest for you – but it sounds pretty interesting.  I’m looking forward to seeing Jen play a completely different character from that of her usual roles as well.