Jennifer Lawrence Doesn’t Want To Be The Next Kristen Stewart — But Will She Be? Take Our Poll! 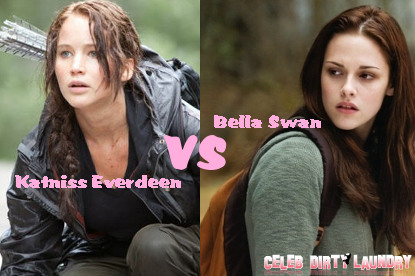 Jennifer Lawrence has come right out with it: she doesn’t want to be the next Kristen Stewart! However, with the Hunger Games film/franchise already reaching a level of epic proportions, it seems our lil’ J-Law might have to put up with the K-stew level of fame before she’s ready.

In an interview with British Glamour, J-Law says that she doesn’t want her life to explode into the spotlight like K-Stew’s did after landing the role of Bella in Stephanie Meyer’s incredibly popular Twilight Series.

“I look at Kristen Stewart now and I think, ‘I’d never want to be that famous’,” she says. “I can’t imagine how I’d feel if all of a sudden my life was pandemonium.”

Unfortunately for Jennifer Lawrence, who will play the lead role of Katniss Everdeen in the much-anticipated Hunger Games film due out March 23rd, it looks like her career is already headed in that direction. We know some people will never hold Katniss in the same light as our dear, awkward, incredibly needy Bella from Twilight, but many people have already found a much greater companionship with the strong and incredibly altruistic character created by Suzanne Collins.

Which character resonates best with you? Which story do you find most powerful, most entertaining? We’d love to hear your thoughts on this . . . that’s why I’ve created a poll. It’s been way TOO LONG since I’ve thrown a poll your way, so don’t forget to cast your vote.

I need an answer on this, people! Will you help me out?