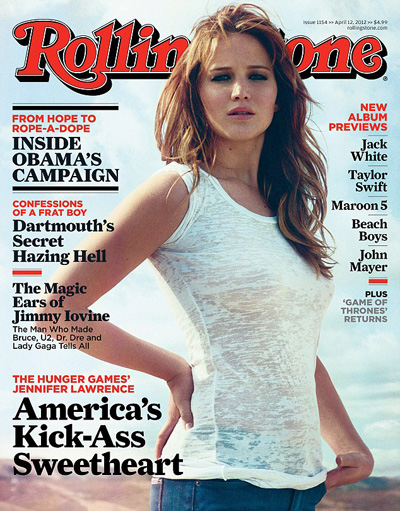 In the latest issue of Rolling Stone, actress Jennifer Lawrence is deemed the “coolest chick in Hollywood” by the magazine’s editors, and the quotes they gathered from her Hunger Games co-stars and the actress certainly prove it.

Following her announcement on David Letterman that she looks like “a troll,” Jennifer also declares herself to “the fastest pee-er ever…I’m famous for it.” And, unlike certain movie stars we can think of, the 21-year-old actress doesn’t consider herself to be above peeing in a bush while on location for a photo shoot, evidently.

Jennifer’s fellow Hunger Games castmates, Woody Harrelson and Josh Hutcherson, got an earful from the Oscar nominee when they first met her:

“I was on my bus,” Woody recounted of his first meeting with her, “and on my bus I have a yoga swing. Jennifer comes on, and she goes, ‘Hi, Woody, I’m J— is that a sex swing?’ Her first sentence to me.”

Josh, who plays Peeta to Jennifer’s Katniss in the movie, also had a memorable first conversation with her:

“When I got cast, she called me up for one of those five-minute ‘Excited to work with you, blah, blah, blah’ things. The conversation started with her saying, ‘Think about a catheter going in – ouch!’ and then turns into a 45-minute rant about zombies and the apocalypse.“

The magazine also asked Jennifer’s BFF, Zoe Kravitz, about her as well:

“I’d met her a few times, and she was like, ‘You should come over and we’ll hang out.’ So I go over to her apartment, and she opens the door in a towel. She’s like, ‘Come in, sorry, you’re early, I was about to shower.’ And she drops her towel and gets in the shower, and starts shaving her legs, totally naked. She was like, ‘Are we here yet? Is this OK?’ And I was like, ‘I guess we’re there!‘”

If we weren’t already J.La fans, we would be now! It’s refreshing for an actress in Hollywood to be so incredibly candid and unconcerned about her “image.” Related: Jennifer Lawrence Calls Herself ‘A Troll’ On David Letterman And Tells Embarrassing Stories