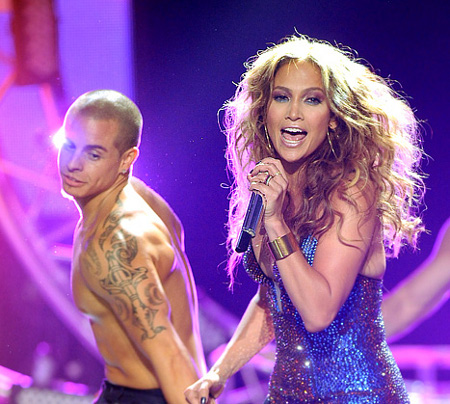 Well, aside from the fact that the 43-year-old Jennifer Lopez is blackmailing American Idol so she can get a raise, it looks like she’s also blackmailing her boyfriend Casper Smart — to have a baby!

Rumors spread last month that J Lo wants to have a baby with Smart. However, tabloids have recently said that Casper is actually not ready to have a baby, as he feels he’s too young to be a father now, which is a perfectly logical “excuse.” Since this news broke out, one of the reality TV shows starring her boyfriend, Casper, is being sold to the Oxygen network. She has already let Casper Smart decide on some of her businesses, and he totally sucked on that. A lot of rumors have already spread like wildfire that Casper Smart is also responsible for Jennifer Lopez’ reluctance on signing for the next season of American Idol; however, JLo has not made her final decision on this matter.

Wow, looks like a lot of things are going on! Jennifer, you’ve only known this guy for a short period of time and you’re kind of giving your all to him now! That sucks for Marc Anthony, you know?

Recent scoops have confirmed that Jennifer Lopez has been telling her closest friends and family that she and Casper Smart are on board in having a baby. One insider has revealed that J Lo is planning to have three or four kids, which she feels should happen now as she is not getting any younger.

One of the sources was even quoted with saying, “Jennifer and Casper spend all their spare time together — he is crazy about the twins!” Looks like Smart is playing the substitute dad role for Marc Anthony, and he’s doing a great job at that!

There are also rumors of J Lo getting herself checked by the doctor if she can still conceive and the doctors say she can have more kids! Now, one big move Jennifer Lopez rumored to have done is that she actually cut her boyfriend’s $10,000 a week allowance! This may be her way of getting Casper to impregnate her.

Will Jennifer Lopez succeed in getting Casper Smart to impregnate her soon? We’ll see how the story goes! I can’t believe how JLo can be so deceptive and sexy all at the same time!