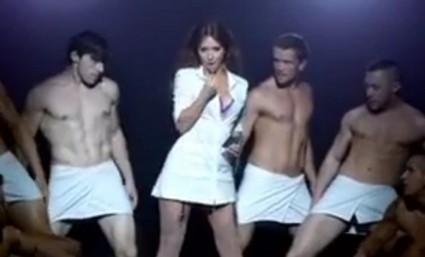 There’s no denying that Jennifer Love Hewitt has a fabulous figure with curves that most women would die for.  So why wouldn’t she use it – and her voice – to promote her upcoming Lifetime show The Client List.  You can catch Jennifer, 32, singing the classic song ‘Big Spender’ amongst a group of nearly naked (and quite handsome if I do say so myself) men.

What does that have to do with the new show? I have no idea but it definitely gets your attention. The show was originally a TV movie made in 2010, in which Jennifer starred in and was nominated for a Golden Globe.  Lifetime cable network has ordered 10 hour-long episodes with Love reprising her role.  Her character is Riley Parks; a housewife in a conservative Texas town who takes a job at a day spa to provide for her children after her husband abandons them.  She soon realizes that the parlor’s employees are prostitutes servicing prominent members of society.  Ahhh – the video is all starting to make much more sense now.

Does Jennifer keep her job and turn to prostitution?  You’ll just have to find out for yourselves when it premieres in March.  The show will also star Colin Egglesfield and Cybill Shepherd.