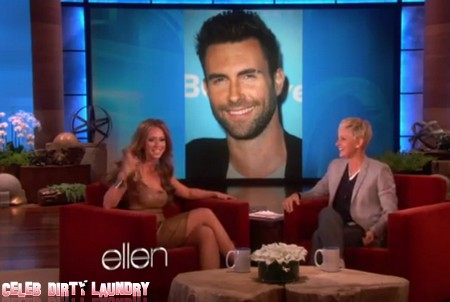 Although Jennifer has proclaimed to be enjoying single life, she told Ellen:

“I always have my eyes out. I just read two days ago that Adam Levine is single again … I’m just saying.”

Adam Levine – the singer of Maroon 5 and judge on The Voice – did indeed recently split from his girlfriend, Anne Vyalitsyna. According to People magazine, they had been dating for two years before they decided to split. Ellen showed a picture of the ‘Moves Like Jagger‘ singer and Jennifer joked:

Ben Flajnik, the star of this year’s series of The Bachelor took Jennifer on a date but decided that she wasn’t the right girl for him:

“It was right in the middle of the time when I was deciding to be the Bachelor,” he told People magazine in December last year. “When this is all said and done, ending up with a Hollywood celebrity is not something that I want.”

Good luck Jennifer – maybe Adam wants to settle down… but maybe not!