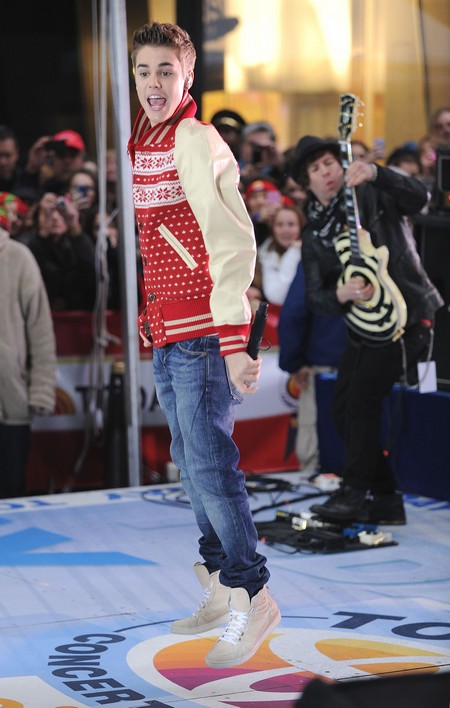 Jeremy Bieber has ratted out his famous son, Justin Bieber, saying that Justin is afraid of the dark – and for his son’s added pleasure Jeremy mentioned that Justin is sweaty.  Well, there had to be something wrong with him.  He has talent, he has looks (I guess?) and he obviously has money.

But guess what, Justin Bieber is flawed and has some issues.  According to his father, who is himself starring on the UK version of Celebrity Big Brother and believes his son is the reason that he himself exists, Justin is afraid of the dark.  We can see already why Justin doesn’t want his dad in the public eye.  Justin is trying to look like a man these days and doesn’t want papa making him look like a baby.

Speaking of his sons quirks, the older Bieber says,

‘My hands sweat a lot, so do his. And his feet. They don’t smell. And he was afraid of the dark for most of his life.’

So there ya have it, Bieber isn’t perfect after all.  One thing that he is though is grateful.  He seems to have a real grasp on just how fortunate he is and thanks god for his privileged life daily.

He explained: ‘God means a lot to me. I pray when I go to sleep. I pray during the day, when I have a problem or when I just want to thank him for all he’s done for me. Without God I wouldn’t be in this position.

Is anyone really surprised to hear about Bieber’s little issues?  Justin Bieber afraid of the dark – not exactly what we want to hear, is it?  I mean he is human and we all have those little things about us that make us unique – but still…

What do you think of his dad?  The man himself has said he believes his son is the reason he exists now.  Kinda sounds like dad is riding Bieber’s coattails of fame, doesn’t it?  Especially since it’s well-known that Bieber was raised by his mother and her family.  What do you think of Bieber and his dad?  Let us know in the comments below!