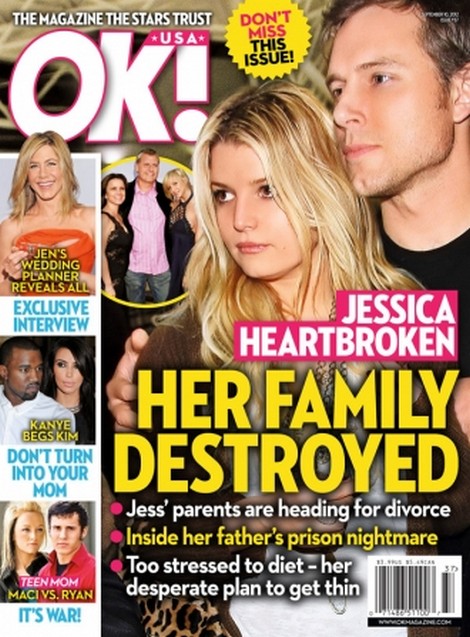 The current issue of OK! Magazine features the cover story ‘Jessica Heartbroken – Her Family Destroyed.’  The magazine claims that Jessica Simpson‘s parents, Tina Ann and Joe Simpson are heading for a divorce.  Joe has been having a lot of problems lately.  He was recently charged with two counts of DUI after an August 4th arrest.  I guess Tina Ann is not thrilled!

The magazine has all the details inside Jessica’s Dad’s prison nightmare.  Joe could face up to 36-months in jail and a fine from the incident.  The whole situation with her parents impending divorce and her father’s arrest have caused Jessica to be stressed to the max.  The whole thing is really getting Jessica down and making it impossible for her to diet.  Poor Jessica is desperate to get her former figure back after giving birth.

Also included in this week’s issue Jennifer Aniston and Justin Theroux are set to walk down the aisle soon.  The web is abuzz with information and speculation about the wedding.  As a matter of fact it is rumored that Jennifer is pregnant and has to get married very soon.  Well OK! has all the info, Jennifer’s wedding planner has spilled the beans and given all the details to the magazine.

Kanye West and Kim Kardashian have been dating for some time now and it is finally dawning on Kanye that Kim is as bad as her mother, Kris Jenner.  According to the magazine Kanye is begging Kim not to turn follow in the footsteps of Momanger Kris.

To find out all this information and all the details on Jessica’s family and her heartache pick up the current issue of OK! Magazine on sale now!