Jessica Simpson Insists On Having Dangerous Sex After Caesarian 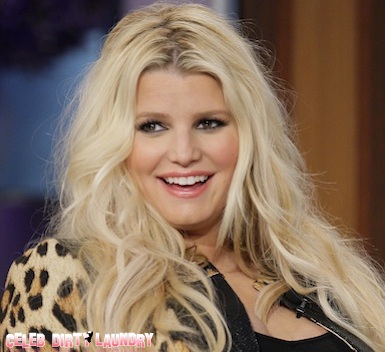 Jessica Simpson recently gave birth to a baby girl with a boy’s name, Maxwell Drew, by Caesarian section and she is risking her health and that of her new fiance, Eric Johnson, with all the dangerous sex she wants to have with him. Doctors warn new mothers that sex is off limits for the first six weeks after having a baby, but Jessica is saying nuh-uh!

“I think I have the sexiest man in the world. So, that’s the rule I will break,” Jessica Simpson told People Magazine. The 31-year old singer welcomed her daughter Maxwell into the world on the 1st of May via C-Section but Jessica says she is not able to keep her hands and other parts off Eric.

Jessica’s hormone treatment made her as frisky as “chicken of the sea” and she said to Idol glue Ryan Seacrest, “I am definitely feeling intimate. I am kind of unstoppable at the moment. Like the big O is like the biggest O ever!” Referring to her orgasmic hormone responses.  Jessica is famous for her sexual energy in the bedroom (and here I was thinking she was famous for her IQ) and her ex-beau John Mayer described her as “sexual napalm”.   Meanwhile they split up anyway…

When a C-section incision is made to deliver a baby, the wound needs time to heal and the new mother could run a serious risk of infection. Jessica has not been the brightest celebrity in the galaxy and after her infamous reality television show with ex-husband Nick Lachey, the world gained a whole new lingo called “Jessica-isms”.

Jessica is not all raunchy sex at the mo’ as there are rumors that she is giving up fast food for the baby, as she wants the best nutrition to feed the kid. The $4 million Weight Watchers deal has nothing to do with it, right Jessica? She tweeted on Wednesday, “So excited to be part of the Weight Watchers family!” Jessica shouldn’t worry too much about her figure, she should rather sign a multi-million dollar deal with Catholic Abstinence Watchers and have that wound heal properly first!

Well, sex burns quite a few calories, so the exercise will surely assist Jessica in being a spokesperson for Weight Watchers, pity no-one really cares about Jessica’s sex life – except Eric we assume.   Why do celebs think they need to tell us all their personal crap anyway?  Or is sex no longer personal in Hollywood?  Let us know in comments below.