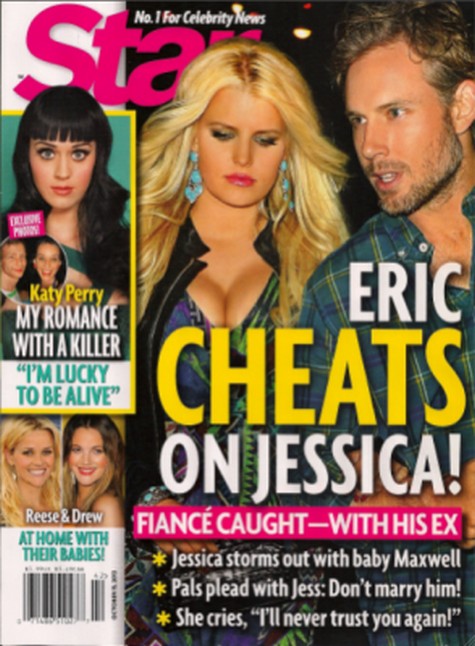 The current issue of Star Magazine features the bombshell story “Eric Caught Cheating On Jessica With His Ex.”  In the explosive cover story this week Star magazine claims that Jessica Simpson‘s fiance Eric Johnson, and the father of her daughter Maxwell Drew, has been caught cheating on her with his ex-girlfriend. Allegedly, Jessica found out about his cheating in September and she  stormed out with Maxwell.

Star has the exclusive story from a source, “He was sleeping with both of them at the same time.  One of them made a joke about Eric and his ex-wife still hooking up when he began dating Jessica.   After the friends left, Jessica asked Eric if it was true, and she blew up after he admitted to it.  He’s a two-timing cheat! He was still having sex with Keri after he started seeing Jessica. She needs to think twice before marrying him. He’s already cheated on her once — he’ll most likely do it again.”

Jessica’s friends are pleading with her not to marry the cheating dog.  Eric has been dragging his feet about marrying her and now after his infidelity she is not sure she can ever trust him again.  A friend revealed, “She’s definitely having second thoughts about the wedding, and her loved ones are begging her to leave Eric.”

What do you think has Eric Johnson been sleeping around?  Is this the reason Jessica has been so desperate to lose her baby weight?  Hit the comments and let us know your thoughts!

Also included in this week’s issue the magazine has all the details of Katy Perry and her romance with a killer.  They claim she said, “She is lucky to be alive.”  To find out all about Jessica, her cheating fiance and many other stories, pick up the current issue of Star Magazine!