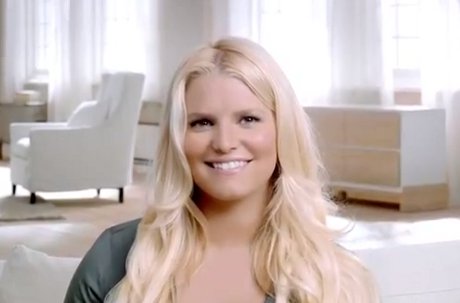 We all know that Jessica Simpson is the new face of Weight Watchers, and we weren’t surprised to learn that she’d be their new spokeswoman, but what we we didn’t know was how awful the new commercial was going to be! I mean, come on, Weight Watchers, what were you thinking? We weren’t ready for this.

The ad shows Simpson, 31, sitting down in a what looks like a showroom with white furniture all around her. That just seems like the first mistake. Why wouldn’t you have her standing up, to actually see what her body looks like? After all, Simpson is promoting a product that deals with weight loss. We know they filmed this shortly after Simpson gave birth so let’s get a good baby weight pic and, eventually, the finished product. You say during the commercial that you want to be healthy for your daughter, and yes, that is admirable. But at the same time, give moms out there a view of yourself, they want to know it’s ok to look like that after they have their child.

The second issue I have with this commercial is you can see how obvious it is that Simpson is reading from a prompt. I know that Simpson isn’t the brightest bulb in the box, but you can clearly see her eyes reading a screen. Maybe the production for the ad was incredibly small since they paid her all that money. Either way, it’s hard to imagine Simpson is only 10 pounds away from her weight loss. Seems utterly impossible to lose 60 pounds in just four months, especially if you have weight issues like Jessica.

Let us know what you think of her new commercial by giving it a quick watch below. Don’t forget to leave your thoughts in the comments section, we’d love to hear from you.