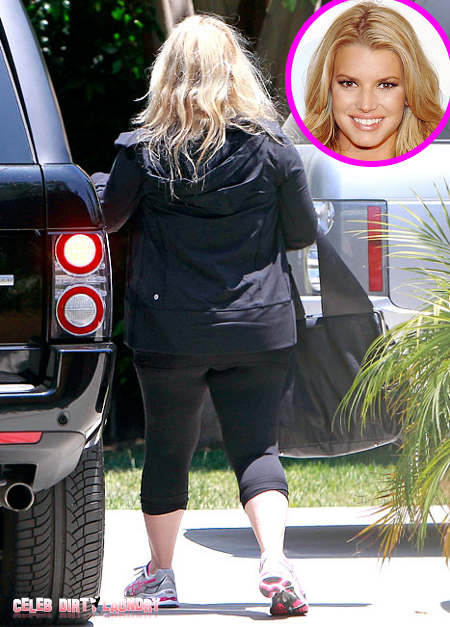 Jessica Simpson‘s post-baby butt was looking absolutely fabulous as she was seen strolling out and about! Since the birth, she’s lost tons of weight, and I think she’s looking great. I loathe to discuss any women’s body shape upon having a child, but the fans demand it so – if you’re curious to see what Jessica Simpson is looking like these days since giving birth to baby Maxwell, here ya go.

Although the picture is of Jessica’s … ahem … rear end, our sources say it’s the one and only Ms. Simpson. According to her reps, she’s been on a mad crusade to shed all the baby weight she put on with her daughter, who is now one-and-a-half months old.

The Fashion Star mentor was spotted hitting the gym in Los Angeles last week, and unlike other times when she’s been snapped in the car, photographers caught her just after leaving the gym.

I got to say, the poor girl just wants to work out in peace! Alas, such is the life of being a celebrity. Simpson was wearing all black attire, which included black-cropped leggings and a black hoodie.

The 5’3 Jess admitted that she weighed in at 170lbs when she posed (heavily preggers) for the cover of Elle , and since having her daughter has had to recover from her C-section before hitting the gym.

Let’s not forget about the $4 million Weight Watchers deal she inked – that might also be a nice incentive. You think? No doubt Jess will be working hard to drop the baby weight, as sadly the world is watching. But who’s kidding whom – when you are rich and famous you can afford a big time trainer so I don’t have too much sympathy for the gal.