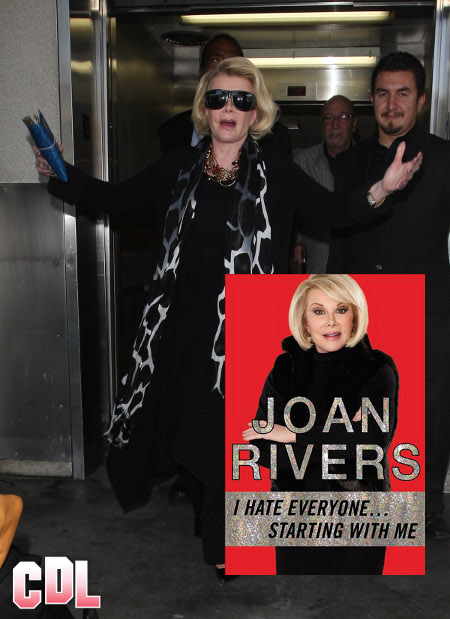 Costco recently banned Joan Rivers‘ book I Hate Everything . . . Starting with me because it contains a considerable amount of foul language — and, honestly, we wouldn’t expect anything less from Joan who is, by definition, the original “Queen of Mean.” But Joan didn’t let Costco’s banning of her book slide; instead, she brought out the perfectly manicured claws and started moving those wonderful plastic lips. The comedienne blasted the wholesale stores in full-on Joan-style and compared them to Nazi Germany, a statement that now has the Anti-Defamation League very mad at her.

But Joan don’t give no cares! Because now she’s firing back at ADL officials telling them to “shut the f**k up!” In response to her original analogy, ADL officials say, “Such comparisons only serve to trivialize the Holocaust and are deeply offensive to Jews and other survivors.”

Joan Rivers — who is Jewish — tells TMZ, “My husband lost his entire family in the Holocaust. My comment reminds people of the Holocaust because half the people now don’t even believe it ever happened.” Joan also adds, “Germany is where banning books started, and it can start here just as quickly.”

Apparently, Joan Rivers thinks that the ADL is overreacting to her comment and should relax a bit. What are your thoughts on this situation? Do you agree with her? Do you think Costco should stop censoring books in the manner they’ve chosen to censor Joan’s book? Do you feel as if any parties involved in this war of words are overreacting — or underreacting? Let us know what you think in the comments below! We’re anxious to hear from you.