Joan Rivers Slams Chelsea Handler on Howard Stern, Says She Slept Her Way to the Top 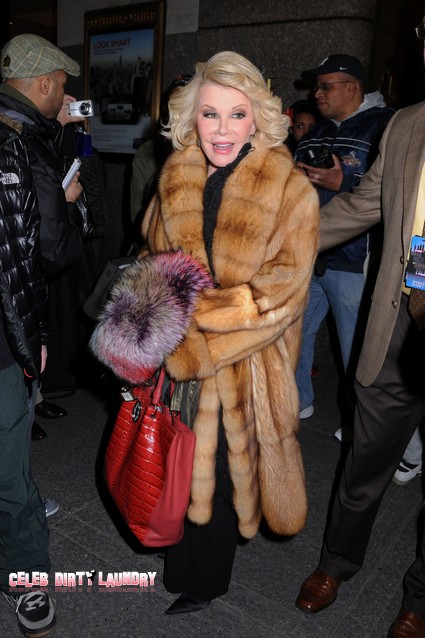 She may barely be able to move her face and body, but Joan Rivers is still agile enough to be pulling no punches against fellow E! Host Chelsea Handler. The two blondes put each other on blast during successive appearances on Howard Stern’s SiriusXM radio show this week and it got ugly with Rivers calling Handler a whore who slept her way to the top.

Rivers, 79, appeared on Howard Stern this morning to promote her new show “Joan & Melissa” and things got nasty during the interview when Stern was able to bate the septuagenarian into discussing the long running feud between her and the 36-year-old late night host—who had conveniently appeared on his show the day before. Rivers repeatedly slammed Handler during the interview, making reference to Handlers past relationship with E! President Ted Harbert. “Number one, the girl made it on her back f**king the president, we all know that, of the network. Number two, she’s fine, she’s ordinary. She’s not a genius. She’s an ordinary girl that was f**king somebody high up in the industry and they gave her a break and she’s doing okay.” Rivers continued her tirade by saying, “Whatever she is, she’s a drunk. I don’t wish her good luck, I don’t wish her bad luck,” Joan said. “I don’t think she’s particularly funny. But don’t you come after me, you wh*re!”

Handler must have done something horrible, like eaten Melissa’s children, to disserve such harsh words. But apparently this fight started because Handler snubbed Rivers at an E! Function.  Lame.

Handler, said during her interview on Monday: “Joan Rivers? What the f**k do I care about Joan Rivers? I don’t think about her ever.” In Handler’s opinion, Rivers started the feud by making several jokes at the younger comedian’s expense during a speech at a Comcast event. “Joan Rivers gets up and she’s like, I’d like to thank Chelsea Handler for giving me a career in comedy, and congratulations on your stage Chelsea because I don’t even have a dressing room,” Handler explained. “And I’m like, f**k off!”

You would think these two funny women would be able to come up with some wittier way of battling it out instead of all this ‘she said, she said’ stuff. I will totally be tuning in to E! Tonight for Chelsea Lately in hopes that Handler’s writers can get some kind of clever jab in. Otherwise, Rivers gets the trophy as top bitch.