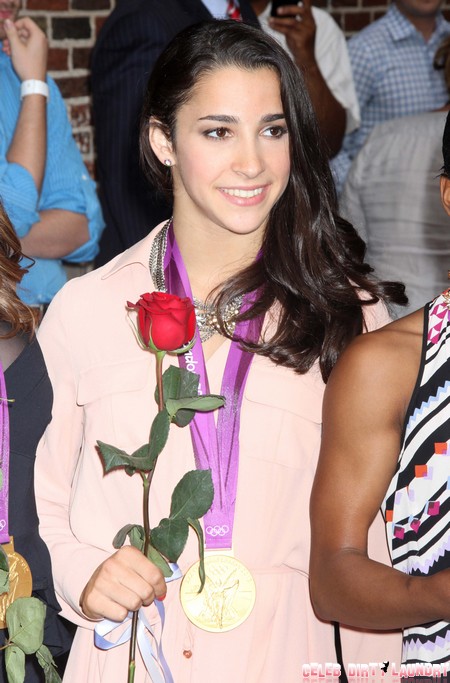 Joe Jonas has told a source that he thinks Olympic gold medal-winning Gymnast, Aly Raisman, is hot stuff and that he wants to go out with her.  What makes this even better is that Aly has expressed all kinds of happiness about Joe’s interest and says that she would jump at the chance to spend time with Joe.  And why not? Two of America’s hottest and most popular young stars getting together and having a wonderful romance.

Imagine just how cute a couple Aly and Joe would make? Celeb Teen Laundry explored the potential love affair from Aly’s perspective recently: The last few weeks have been an absolute whirlwind for gymnast Aly Raisman. She has gone from being a star in the gymnastics world to a household name pretty much overnight. The U.S. team Captain has caught the attention of numerous celebs and many took the time to tweet their support. No tweet mattered more to the young athlete then Joe Jonas’ saying that Raisman “and the women gymnasts are incredible.” She was beyond flattered that any Jonas even knew she was alive and according to US weekly she’d love a chance to date him!

“I’m excited to get to know him. I would go on a date with him.”

Aly is like a million other girls that would love a chance to get close to Joe, but she does have an advantage in that he actually knows who she is and acknowledged her first!

Aly and Joe come from different religious backgrounds with Joe’s dad, Paul Kevin Jonas Sr., being a former Pentecostal Minister and Aly being Jewish.  We don’t know how observant either star is but we assume that there would have to be some accommodation and tolerance on both sides if the relationship were to mature.

The mastermind of hot gossip, Shelby Loosch, reports in this week’s GLOBE Print Edition (September 10) that Joe has a secret crush on Aly: Joe Jonas, 23, has the hots for 18-year-old Olympic gymnast Aly Raisman! The middle Jonas Brother, who previous galpals include Taylor Swift, Camilla Belle, Ashely Greene and Demi Lovato, is dying to be set up with Aly – captain of the gold medal-winning U.S. team.

“Joe thinks Aly is really cute and is waiting for an introduction,” says a source.  “She’s flattered by the attention and would definitely go out with him.”

We all want to see Joe and Aly get together.  We need some fresh blood in the hot couple department – Kristen Stewart and Robert Pattinson pretty well crushed our dreams this summer and Justin Bieber and Selena Gomez are hanging by a thread.  It’s time for Joe and Aly to give us something new to dream about.   I mean we can’t do much with Kim Kardashian and Kanye West – their special song is “What’s Love Got To Do With It.”