Joe Paterno Is On His Death Bed 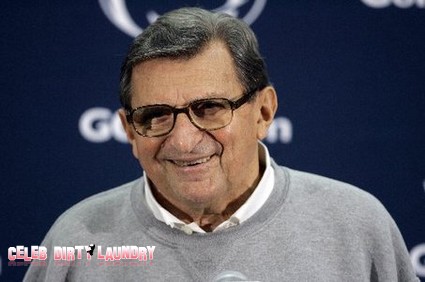 Joe Paterno is near death according to reports on the Internet. The iconic coach for 46 years at Penn State University was fired by the school last November following the sexual abuse allegations against his former assistant coach, Jerry Sandusky. Paterno is battling lung cancer and is in serious condition after experiencing complications from the disease – and his respirator has been turned off, never a good sign.

The 85-year-old Paterno has been in the hospital since January 13 for observation for what his family had called minor complications from cancer treatments. But a spokesman for the family says doctors have “characterized his status as serious.”

Dan McGinn said in a brief statement Saturday to The Associated Press:  “Over the last few days Joe Paterno has experienced further health complications, his doctors have now characterized his status as serious.”

Onward State, a student-run newspaper on campus, reported Saturday he had been taken off his respirator. The Citizens Voice, a newspaper in nearby Wilkes-Barre, PA, reported Paterno’s wife Sue summoned close friends and longtime staff members to State College hospital.