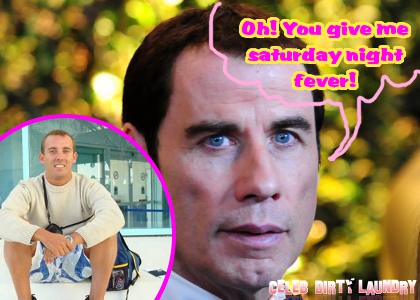 John Travolta‘s life appears to be endlessly spinning out of control, and his sex scandal disaster continues to escalate after cruise ship worker Fabian Zanzi has decided to sue him for sexual assault, which allegedly occurred on a Royal Caribbean cruise ship in 2009.

Apparently, Travolta, while he was a passenger on the cruise ship back in 2009, ordered food and politely asked Zanzi to deliver it to him. Zanzi, of course, obliged . . . only to find that, after arriving at the cabin, John Travolta wanted a bit more than a plate of food. Yep, he asked for one of his massages, which, according to Zanzi, turned into a full on sexual assault.

The thing that I find curious is why a person can’t just rub down a famous actor and keep their freakin’ mouths shut! Poor Johnny has gotten so much stress for these alleged massages that I, unfortunately, feel as if even his Scientological magic won’t be enough to save him from the copious amounts of emotional/psychological/sexual stress he’s suffering from.

While Zanzi was in the presence of just-let-me-feel-you-for-a-second Travolta, he was apparently told that he was “beautiful.” Later, John Travolta said, “Take me, I will take care of you, please.”

Zanzi, who resisted John’s advancements (including a special preview of his lil’ John Travolta), was offered nearly $12,000 by the actor to keep his mouth shut and never speak of this alleged event again.

What do you all think about John Travolta’s current predicaments? Do you believe all these crazies seeping out of the woodwork like bloodthirsty ants? According to TMZ, John’s representatives couldn’t be reached for commentary, but we will let you know if there are any further developments.

Perhaps it’s time for John to crack open that extra special time travel spell of his and make this entire mess vanish for good.