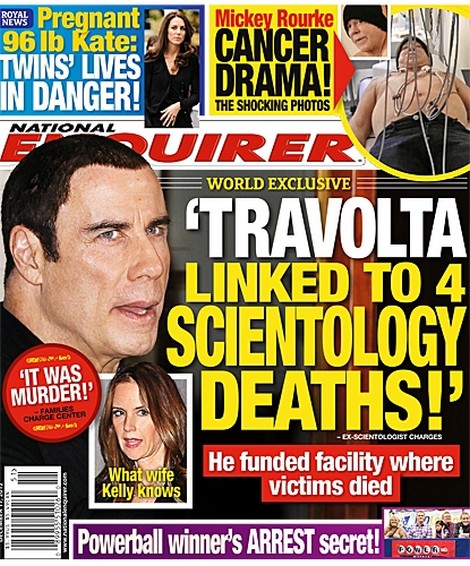 On the latest cover of National Enquirer, we’re once again treated to the usual conglomerate of stars and their fanciful ways, but the most notable story in this week’s edition of the Enquirer belongs to the Missouri family that won half of the USA’s largest ever Powerball lottery jackpot. Mark and Cindy Hill, two of the luckiest people in the world, won an unparalleled $293 million jackpot during the Missouri Powerball draw, but according to insider sources, this money is only further driving a wedge between the feuding family members.

Mark and Cindy’s son, the 30-year-old Cody, has a bit of a dark past that no one needs to know about, and according to a friend, this past is about to become front page news. “Things could become really messy, really soon. It wouldn’t be the first time a windfall has wrecked a family. The Hills didn’t want anyone to know about Cody’s past, but now that they’ve won a multimillion-dollar jackpot, they’ve suddenly become national news. He’s far from the model son.” So, the age old adage of “money can’t buy happiness” really is true. The Enquirer will reveal in the latest issue why this jackpot winning family could have done without the post-tax $136.5 million.

The other, more perturbing story belongs to none other than Scientologist and part-time Mykonos tourist, John Travolta, and his unwitting wife, Kelly Preston. According to the report, Travolta and his wife have been implicated in a wrongful death lawsuit that stemmed from Scientology’s controversial drug rehab program, Narconon. This controversial drug rehab operation, located 90 miles south of Tulsa, is currently under official investigation after four deaths were reported at the facility during recent years. Travolta and his wife have publically acknowledged the program, and even funded the program through private benefits. Now, several of the family members who lost loved ones at the controversial facility, are suing the organization and its funders. Connie Werninck, who lost her 28-year-old daughter Kaysie to Narcanon’s care in 2008, told National Enquirer, “If I could talk directly to John Travolta, I would tell him the program he is supporting is responsible for killing my daughter!”

The Church of Scientology has since asserted that Narconon Arrowhead – as it is officially known – is associated with the church, but that the facility in Tulsa is not, in any way, affiliated and/or controlled by the church. A rep for the church said, “There was nothing that the Church of Scientology did, or failed to do, which caused or contributed to the fatalities at Narconon Arrowhead.”

Riveting stuff, even if we have to say so ourselves! If you’re interested to read more about Travolta’s love affair with Scientology and the Missouri family who might lose it all, head down to the local supermarket and pick up a copy of National Enquirer.

It is, after all, one of the most spellbinding reads of the week.