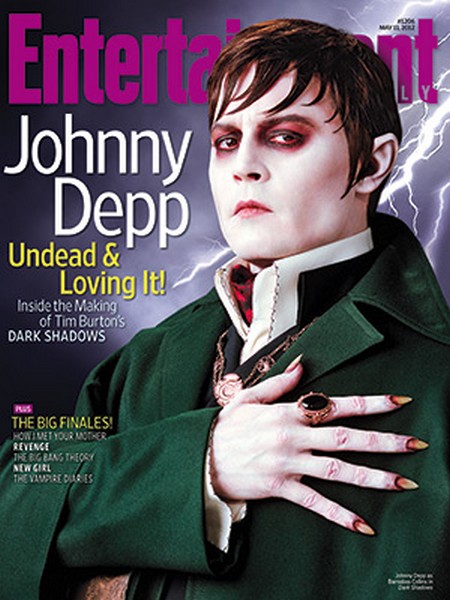 Another weird and wonderful collaboration between Johnny Depp and Tim Burton is on its way to the big screen.  Dark Shadows, the film based on the cult-hit TV show is hitting theaters next week and the new issue of Entertainment Weekly has a unique inside peek.  Johnny Depp and director, Tim Burton have actually collaborated on eight films in the last twenty years and the duo clearly shares a deep bond.

“None of us gets their jokes, but they get their jokes and they’re laughing, so whatever,” says Helena Bonham Carter and she would know.  The actress is mom to two of Burton’s children and has worked on many projects with the duo, including this film.  Depp also agrees that the bond is special,

While Burton isn’t quite as publicly sentimental about the friendship saying, “We don’t wear our ‘This Is Our 8th Movie Together!’ t-shirts every day,” He does concede that the good and often familiar working environment does also extend to the crew which is often an odd group.

“A film family is a family, and it’s a beautifully dysfunctional family,” says Burton.

This family’s newest baby, “Dark Shadows” lands in theaters on May 11th.  Is it a movie you’ll be heading out to see?  Tell us in the comments below.