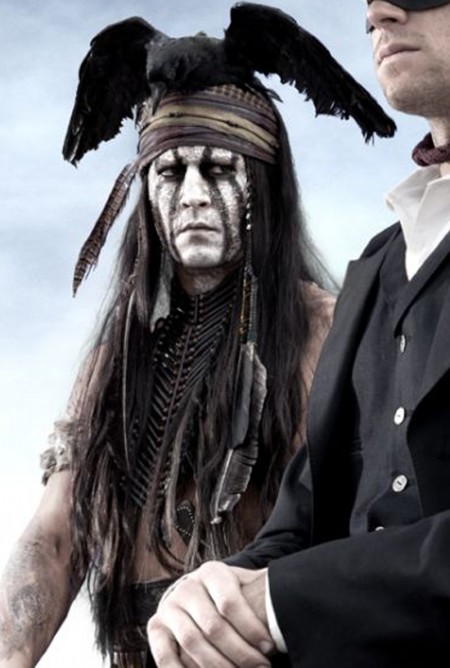 Johnny Depp has done tons of roles like Captain Jack Sparrow in ‘Pirates of the Carribean‘ and his recent new film ‘Dark Shadows‘ where he plays Barnabas Collins.  When it comes to research for a new character to play, Johnny is a hard worker. In his upcoming role as Tonto in Gore Verbinski’s rendition of “Lone Ranger”, Johnny is going all out with researching the character.

Johnny had been invited to join the Comanche tribe, located somewhere in New Mexico, after they found out about his involvement in “Lone Ranger.”  I guess the Comanche figured if you can’t beat him, get him to join you!

La Donna Harris, the president of Americans for Indian Opportunity said “I reached out, and Johnny was very receptive to the idea, he seemed proud to receive the invitation, and we were honored that he so enthusiastically agreed… He’s a very thoughtful human being, and throughout his life and career, he has exhibited traits that are aligned with the values and worldview that Indigenous peoples share.”

So far the only thing we’ve got on his new role is a photo of Depp as Tonto, if your thinking why is there a dead bird on his head? It’s because it’s Tonto’s spirit guide though it seems dead, to Tonto, it’s alive. The makeup/costume that Johnny wears was inspired by Native American Artist Kirby Sattler’s painting “I AM CROW“.

But it is kind of weird.  I mean asking Johnny to join tribe because he plays Tonto?  It seems like rather mercenary ploy on the part of Harris to bring attention.  I’ll tell you one thing.  If Mel Gibson plays a Jew in a movie I won’t be asking him to join my tribe!