Jon Hamm’s Friend Begged Him To Knock Her Up — To Father, Or Not To Father? 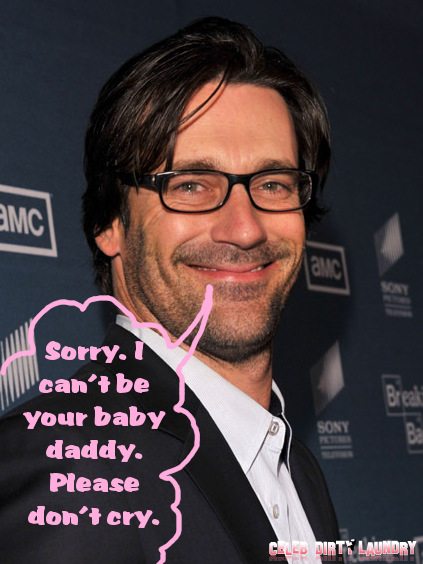 Jon Hamm, who is perhaps best known for his role on Mad Men, was once asked by his close female friend if he could be a pal and impregnate her. You know, that thing friends do for each other. NBD, right? Allegedly, the friend was desperate to have a baby, but Mr. Hamm did not succumb to her plea and ultimately refused her offer.

Well, we hope so! That would not be incredibly responsible of you now, would it? The actor turned down the request because he, at the time of her asking, apparently had no job and was completely broke. Strong set of morals on this celeb *sigh*

“I have actually been asked to be a father by a friend who wanted to have a kid. It was kind of weird and out-of-nowhere and I said no. Mainly because I was totally unemployed, and I would feel so responsible, even though they said, ‘Don’t worry, no strings attached.'”

Hmm, interesting. So, does that mean if Jon would’ve had the money, would’ve had a job, that he would’ve given his friend a baby? What do you think . . . does that sound like something this Mad Men star would do?

Despite all this baby talk, Hamm admits that he and longtime partner Jennifer Westfeldt aren’t considering having kids of their own. But you know what they say: the word of a celeb can rarely be trusted.

Do you think Hamm is father material?