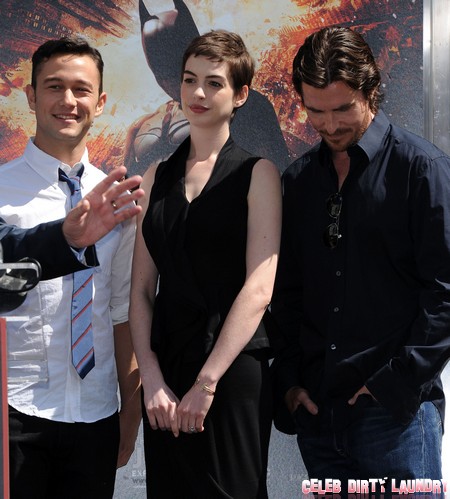 Joseph Gordon-Levitt supposedly has some issues with Anne Hathaway. Although they worked together on The Dark Knight Rises together we are hearing things didn’t go so well.

“They may have been all smiles for the camera during The Dark Knight Rises press tour,” but sources say that down-to-earth Joseph Gordon-Levitt actually can’t stand his costar Anne Hathaway. “Joe says she’s always acted like an insufferable snob toward him and that the awkwardness got so bad between them during filming that whenever she’d walk into a room, he’d have to immediately walk out of it. He thinks she’s a good actress, but he just doesn’t understand her ego.

“He wanted to make fun of how seriously Anne was taking herself and the role,” says a source. “He was too polite to point out to her that she was playing a cat in a comic-book movie, not actually saving the world,” the insider

Is this something that I am willing to believe? No, not really. You can find them singing a duet on Youtube last year at one of his HitRecord live shows. If JGL really thought that Hathaway was a snob why would he invite her to show and do a song with

I can imagine it may be hard to work with someone that may take a role too seriously, but this after all was the final installment of the Batman franchise with Christopher Nolan directing. I imagine everyone was taking their job very critically, including JGL. Sure, JGL got a little heat last month for saying “pretty girls aren’t usually funny” but that has since died down. Or does that mean JGL doesn’t think Hathaway is as funny as she is pretty? Probably not, and those words, I hope, were not taken to heart.

These two are wonderful actors of the younger generation and regardless of whether or not JGL thought Hathaway was being a snob or not it doesn’t matter, the movie has been out for three weeks now and has performed marvelously. Now all we can do is wait to see if these two will work together again.