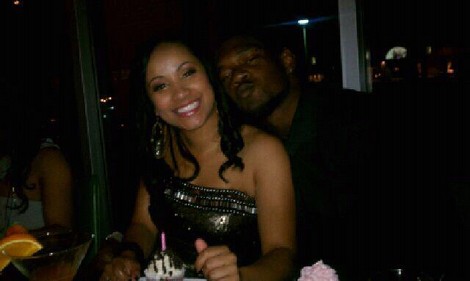 Early this morning Kansas City Chiefs linebacker Jovan Belcher and longtime girlfriend Kasandra Perkins got into an argument. In a tragic turn, Jovan shot Kasandra multiple times—she was later pronounced dead at a hospital. A Kansas City Police spokesperson explained police reaction to a 911 call from his home: “When we arrived, a lady informed us that her daughter had been shot multiple times by her boyfriend, by the daughter’s boyfriend. She identified him as a Chiefs player.” Belcher then drove to the teams practice facility next to Arrowhead Stadium in Kansas City, Missouri, where he thanked his coach Romeo Crennel and Manager Scott Pioli before taking his own life. Those at the training center explain that the Crennel, Pioli, and other personnel tried to stop him, and police arrived at the scene moments after he acted.

Kasandra gave birth to a baby in September, and her family describes the couple as blissfully happy and in love. 22-year-old Kasandra was overjoyed to become a mother, as was Jovan. Her family has explained that news of the murder-suicide came as utter shock. Police have confirmed that Kasandra’s mother and her 3-month-old daughter were home at the time of the shooting. Police confirmed her presence: “We arrived [at the hosue] and the lady there informed us that her daughter had been shot by her on-again of-again boyfriend.”  Of course, on-again, off-again status suggests a rocky relationship, but despite any relationship troubles, Kasandra’s family describe them as an extremely happy couple.

At this time, it is hard to determine what the couple was fighting about, but Kasandra’s mother may be able to help shed light on how the argument escalated, but for now they maintain that there were no warning signs. As always, our thoughts go to the surviving family members, and especially to their infant daughter.