Juliet Simms Eliminated From ‘The Voice’

BY Robyn Good on May 8, 2012 | Comments: Leave Comments
Related : Reality TV, The Voice 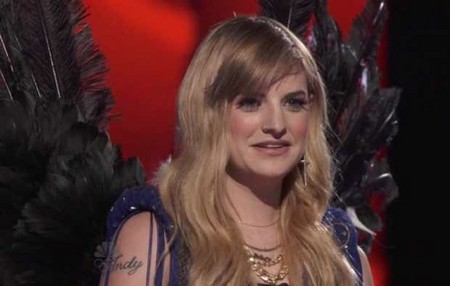 Many people thought the front runner to win ‘The Voice’ was 26 year old Juliet Simms, but in a shocking turn of events, she was sent home by America. The singer, songwriter and band member of “Automatic Loveletter” has been a favourite on the show since her “Roxanne” performance, Adam went so far as saying that her performance was “the best yet.” She was initially chosen by judges Christina Aguilera, Adam Levine and Cee Lo Green, but she chose Team Cee Lo.

Her ‘Janice Joplin’ raspy style of voice has been swaying the vote in her favour from the beginning. She has credited David Bowie, Janis Joplin and Dashboard Confession as her inspirations.

Last week, Juliet got a huge compliment from coach Cee Lo Green, when he awarded her 60 of his allotted 100 “coach” points.

Julie is no stranger to the music business, she has been in the industry since she was 15 years old, released an album, toured with her band and her music is actually licensed to MTV’s “The Real World” and “Road Rules.”

On the last leg to the finals, Juliet belted out James Brown’s “It’s a Man’s, Man’s, Man’s World.” Did you see the performance? If you missed it or just want to see it again, you can watch the video HERE.

The judges were so impressed with her performance, Cee Lo gave her a standing ovation – the performance was really special.

Juliet was the only girl left on the stage against Jermaine Paul, Tony Lucca and Chris Mann, but was she worried? Not at all, here’s how Juliet sums it up, “It feels great to be the only woman in the competition, from this point on, it’s all about girl power. Show the men what’s up.”

What do you think about Juliet being voted out? Do you think she should have won? Sound off your comments below and let us know how you feel about Juliet’s ‘The Voice’ experience.