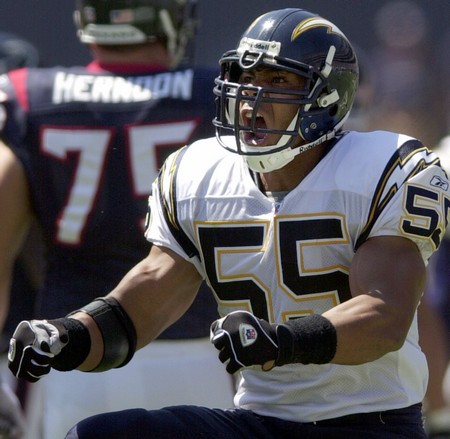 NFL Legend Junior Seau has shot himself dead.  Law enforcement officials tell TMZ that Seau’s body was discovered by a housekeeper at his Oceanside, CA home.

Junior Seau suffered brain damage and subsequent mental illness as a consequence of the injuries he received during his NFL career.  Seau possibly attempted suicide when he drove his SUV off a cliff in Carlsbad, CA hours after he was arrested for allegedly attacking his girlfriend in 2010.

TMZ has all the exclusive details and updates to this tragic story:

11:33 AM PDT — Law enforcement sources tell us … Seau died of a self-inflicted gunshot wound to the chest.

11:26 AM PDT — The North County Times is reporting Seau’s body was discovered by his housekeeper.

11:20 AM PDT — The San Diego Chargers have posted a tweet saying, “We don’t have any information right now on the Junior Seau situation. We pray he’s ok.”

NFL legend Junior Seau was found dead in his home in Oceanside, CA … and a law enforcement source at the scene tells us cops believe he shot himself.

Seau was 43-years-old … and leaves behind 3 kids and an ex-wife.

Cops are currently at Seau’s home — located in San Diego County — and were seen talking with a man who was inside the house and appeared distraught.

We’re told Seau sent text messages to his ex-wife and 3 kids yesterday saying, “Love you.” We’re told they all responded and didn’t suspect anything was wrong.  We’re told he last saw his kids 3 weeks ago.

Seau was a beast in the NFL — skyrocketing to fame thanks to his explosive play with the San Diego Chargers, Miami Dolphins and New England Patriots. The USC standout was selected in the first round of the NFL draft in 1990 and played in the league for 20 years.

Seau was involved in a car accident back in 2010 when he drove his SUV off a cliff in Carlsbad, CA hours after he was arrested for allegedly attacking his girlfriend. Seau later said he was not trying to kill himself … insisting he had fallen asleep at the wheel.