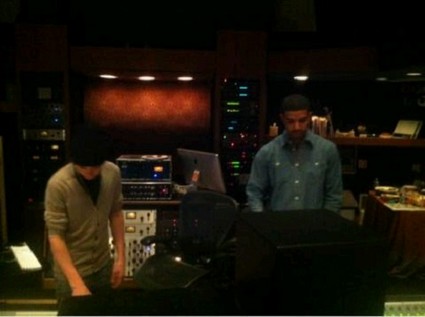 Justin Bieber and Drake are two of the hottest young acts in the music business and they are woking together on Justin’s next album. Stories of the Canadian collaboration came out in December and earlier today Justin’s manager, Scooter Braun treated us to a Twitter message confirming the amazing news.

Scooter tweeted a photo of Justin and Drake along with the following message:  “This has been a long time coming. #canadians #Believe”

Most people know that Justin is Canadian – growing up poor in low-income housing in Stratford, Ontario. Justin was raised by his single mom, Patricia Lynn “Pattie” Mallette, who just 18 years old when she became pregnant with her the Biebs. Pattie raised Justin with the help of her parents, Bruce and Diane. Justin’s has German ancestry on his dad’s side but his mother’s ancestry is French Canadian. Justin even attended a French immersion program at the Stratford school, Jean Sauve.

As he grew up, Bieber taught himself to play the piano, drums, guitar, and trumpet. In early 2007, when he was twelve, Bieber sang Ne-Yo’s “So Sick” for a local singing competition in Stratford and placed second. Mallette posted a video of the performance on YouTube for their family and friends to see. She continued to upload videos of Bieber singing covers of various R&B songs, and Bieber’s popularity on the site grew. Once he was discovered by Scooter and introduced to Usher it wasn’t long before Justin was on his way to becoming the most popular pop star in the world!

Drake was born Aubrey Drake Graham in Toronto, Ontario. He is the son of Dennis Graham, a drummer who worked with Jerry Lee Lewis, and Sandi Graham, an educator. Two of his uncles, Larry Graham and Teenie Hodges, are also musicians. Drake’s dad is an African American from Memphis, Tennessee, and Drake’s mother is a white Jewish Canadian. Drake attended a Jewish day school and had a Bar Mitzvah. His parents divorced when he was five years old, and he was raised by his mother in Toronto’s wealthy Forest Hill neighborhood. Drake is Jewish since his mother is Jewish and a child’s religion is determined by the religion of the mother in the Jewish faith.

Drake attended high school at Forest Hill Collegiate Institute, where he began acting, but did not graduate. He spent most summers with his dad in Memphis. Drake stated that his parents’ divorce greatly affected him as a person, saying, “I had to become a man very quickly and be the backbone for a woman who I love with all my heart, my mother.”

Both Justin and Drake are very devoted to their moms and are really great people. Drake from a privileged background and Justin from an impoverished one – but both Canadians are together now and will no doubt produce some great music.