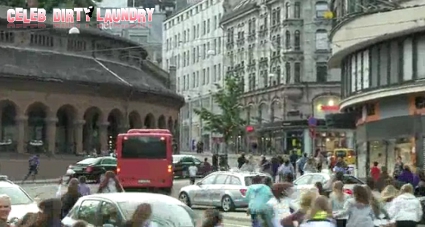 Someone needs to tell Justin Bieber that he’s just too popular for his own good — especially when it comes to his European fans!  Earlier today, the Beebz was set to play a ‘secret’ show in Oslo, Norway — a number of secretive shows all part of his “Around the World” TV special.

Not so secret Justin.  His fans gathered by the thousands — scratch that — tens of thousands, to get a glimpse of their favorite heartthrob.  The only problem is . . . the local police are getting ready to declare a state of emergency.

The Norway police pleaded for Justin to intervene, asking him to reach out to his fans before they lost any more control of the growing mass of young screaming teens.

TMZ first reported that the Biebs was scheduled to perform this evening out front of Oslo’s famed Opera House, however the police demanded that Justin hit the stage sooner rather than later.

Justin has since taken to Twitter to address the roaring crowd:

“NORWAY – please listen to the police. I don’t want anyone getting hurt. I want everything to go to plan but your safety must come first. for the show to happen u must all listen to the police. we are all concerned for your safety and i want what is best for u. please listen and tonight we will have some fun. love you and im excited to see you all. NORWAY…THANK YOU FOR HAVING ME! “

What is this a Rolling Stones concert? Apparently there have been no major injuries/accidents.

To take a look at the Bieber Fever Epidemic for yourself, watch the video below: