Justin Bieber Fights With The Paparazzi Again – What Is Becoming Of Him? (Photos) 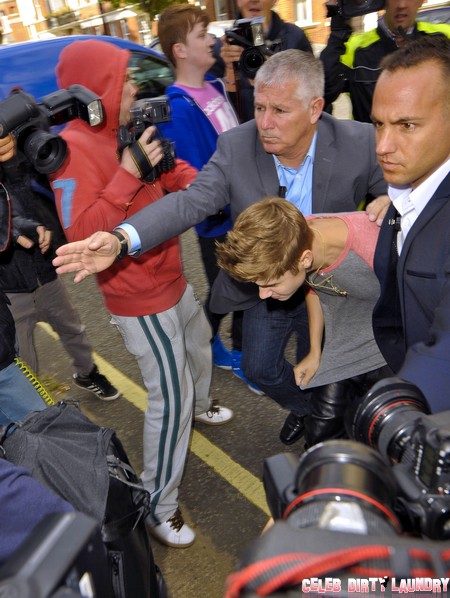 Justin Bieber isn’t going to end his war with the paparazzi anytime soon! He found it difficult to get into the luxury vehicle due to the massive paparazzi presence and things quickly got out of hand. According to reports, Bieber had a “shoving match” with the paparazzi in London early this morning when he tried to enter his limousine. This was not the first time that the Biebs had been involved with a pap scuffle, as earlier this year he punched a paparazzi photographer who didn’t stop pestering Biebs and his GF, Selena Gomez.

According to the latest reports on the incident, Bieber flipped his lid when he was surrounded by paparazzi, so in true Bieber vs. Paparazzi fashion, he pushed and shoved his way through the crowd. Eyewitnesses reported that Bieber was photographed “actually grabbing paparazzi by their collars and literally throwing them out of the way.” OMG Biebs! Why all the anger all of a sudden? They’re just doing their job, even though they’re a bit vulture-like! The sad fact is that Bieber was accompanied by his bodyguards, but he decided to take the situation into his own hands. The eyewitness reports concluded, “One photog was being pushed away by Bieber into the second paparazzo…” Hey, almost like paparazzi dominoes? Now wouldn’t that be a fun game to play!

Hope Carson at Celebs Gather asked the tough questions, “Is he becoming, as has been suggested, increasingly arrogant and thin-skinned – in other words a spoiled brat with a short fuse? Or was his belligerent behavior toward the paparazzi justified?”

Uhm, we’re going with the “spoiled brat with a short fuse” one. Oh, and could we get some fist cake and fries with that?

Let us know in the comments below if you think Bieber is slowly unraveling and becoming a moron.

Singer Justin Bieber leaves his London, England hotel and greets his some of his screaming, female fans outside on September 12, 2012.