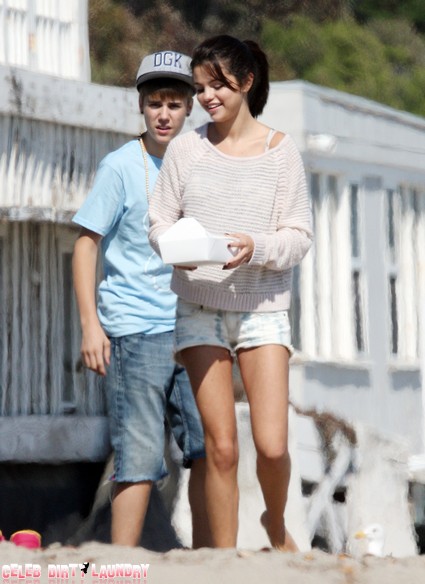 With her new wrist tattoo symbolizing her love for Justin Bieber, Selena Gomez stepped out for a stroll with her man wearing some short shorts. The lovely young couple took advantage of some free time and were out and about wearing his and hers shorts at The Calabasas Commons in California yesterday. Justin and Selena chose yogurt and iced coffee as their preferred snacks for their outing.

Needless to say, Justin covered as much of his rather skinny legs with past the knee shorts while Selena, who has the better legs of that couple, wore much shorter shorts. (see photo here)

Meanwhile Selena has joined in with Justin’s love of tattoos as new Twitter picture shows her posing with tattoo artist Louie Gomez – who coincidentally shares the same surname as Selena – as she holds up her wrist to exhibit the new heart etching on her wrist.

Store employee Jordan Sandoval, from the Under The Gun shop in Hollywood, tweeted the image, revealing Gomez was not scared of the pain: ‘She wasn’t nervous. She is way cute,’ he wrote.

The Mail Online reported:  They’re one of the sweetest celebrity duos out there, and have been taking advantage of the opportunity to spend some quality time together in between their independent projects.

And it looks as though like many longer-term couples, Justin Bieber and Selena Gomez are starting to share a rather similar dress sense.  The pair looked cute in shorts as they grabbed an iced coffee and frozen yogurt at The Calabasas Commons in California yesterday.

The pair were surrounded by their entourage as they picked up their snacks at The Corner Bakery and Menchie’s.

Selena shielded her eyes with a cool pair of sunglasses and teamed her shorts with a white vest.
Justin completed his ensemble with a black T-shirt and gold pendant. They made their way out into the sun as they enjoyed their refreshing snacks.

Hollywood’s cutest couple keeps on being cute. Do you approve of Selena’ s new tattoo or do you think that all tattoos are trashy? Sound off in the comments below.