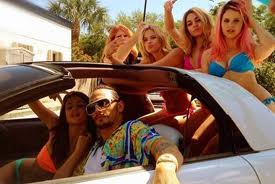 Justin Bieber is in a jealous snit over the fact that Selena Gomez is crushing on Hollywood screen idol James Franco.  James has as his special groupies several of the hot women starring in the new film Spring Breakers – and Justin is not pleased.  Selena and her co-stars, Vanessa Hudgens and Ashley Benson have totally fallen for sexy James and Justin, who is used to being the center of attention is feeling left out in the cold.

Justin recently bragged that he was a great boyfriend saying “I’m loving and patient and kind and gentle.”  Okay Justin… but are you HOT?  Because it seems that the chicks filming the flic think that James certainly is!  I mean these beauties like Selena and Vanessa are women after all and while Justin definitely does sit for the tween-set, perhaps these young ladies are looking for a more mature man to adore?

An insider told In Touch Print Edition, April16 that Justin’s jealousy might be well grounded!

“He’s always hanging around the set to keep an eye on her,” the insider remarked on Justin’s behavior recently.

The insider goes on to say that Selena, Ashley, and Vanessa “think  James is hilarious and so cute.”

“There’s been a lot of flirting, and James keeps everyone laughing and excited.”

Meanwhile Justin is taking no chances and is keeping a tight grip on Selena – an insider said “Justin makes sure Selena’s always happy.”

James probably knows that his hot female co-stars are off limits to him– but does Justin?  Does Selena?  We are not suggesting that Selena and James are heading off behind a sand dune or anything like that… but stranger things have been known to happen!  What do you think?  Could anything come between Justin and Selena?  Are they a couple for life?  Let us know in the comments below.